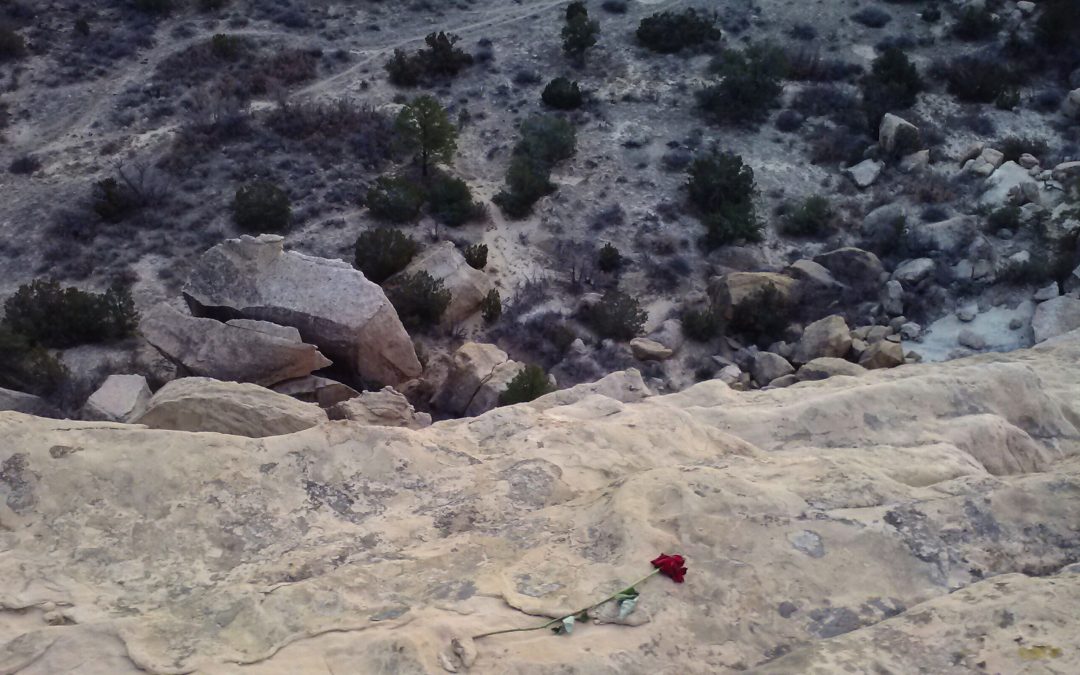 Since my writing partner, Jay Holmes, is a covert intelligence operative, we often meet and work in remote locations. The day after Valentine’s Day found us plotting our next novel while we hiked up a cliff in a remote section of a desert. Near the top, I noticed a rose. Yes, a rose. In the middle of nowhere. Then another, and another. A trail of four roses that led to the very edge of the cliff.

I immediately turned to Holmes and expounded on how two lovers quarreled the night before:

Orlando topped the rocks behind her and held up four roses. “Check out what I scored from dad’s new girlfriend. Oh, and I got you a cheese grater. Let’s go back to dad’s trailer, and you can make me a pizza.”

Dixie, stunned by his words, numbly took the flowers. “A cheese grater?”

Orlando shrugged. “What else would I bring? Come on. I’m hungry.”

Furious, Dixie flung the roses at Orlando with such force that she lost her balance and toppled over the cliff. The mountain lions rejoiced.

When I finished, Holmes rolled his eyes and said, “Back to our spy thriller . . .”

We agreed to leave the romance to you and to USA Today bestseller Vicki Hinze. So today, we offer you a flash fiction challenge.

Tell us your story of the Cliffside Valentine Rose in the comments below. Tell it in 150 words or less, and include “Dixie,” “witness protection,” and “cheese grater.”

Next Wednesday, March 5, come back and vote for your favorites. USA Today bestseller Vicki Hinze has generously donated three copies of one of my own favorite books, Down and Dead in Dixie, about a young woman who stumbles into the middle of a mob turf war and finds out that to live, sometimes ya gotta die.

“Dixie” and “witness protection” are some clues as to what you will find in this clever, humorous novel. Cheese grater? Nothing to do with Vicki Hinze’s book, and everything to do with a reason to throw flowers at a boyfriend. But that’s another story.