Why Over is NOT Over — Afghanistan 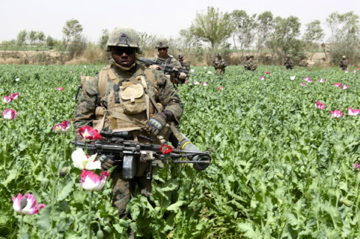 With the “ISIS crisis” occupying the headlines in Europe and North America, the US and NATO military operations in Afghanistan have been all but forgotten in the media.

US Marines patrolling poppy fields in Helmand Province
Image by Dept. of Defense.

On December 28, 2014, US President Obama announced that after thirteen years of combat, the longest war in US history, the war in Afghanistan, was ending. However, the president pointed out in the same speech that US forces would, in fact, remain in combat in Afghanistan.

The war that is “over” is not over.

To most accurately represent the President’s words from his December 28 speech, it is best that we offer a direct quote. The following is the entire fourth paragraph of President Obama’s speech:

“Afghanistan remains a dangerous place, and the Afghan people and their security forces continue to make tremendous sacrifices in defense of their country. At the invitation of the Afghan government, and to preserve the gains we have made together, the United States—along with our allies and partners—will maintain a limited military presence in Afghanistan to train, advise, and assist Afghan forces and to conduct counterterrorism operations against the remnants of al-Qaeda. Our personnel will continue to face risks, but this reflects the enduring commitment of the United States to the Afghan people and to a united, secure, and sovereign Afghanistan that is never again used as a source of attacks against our nation.” [emphasis added]

In attempting to interpret and understand the President’s intent in Afghanistan, I am left in the precarious position of trying to extract facts from a political speech.

In the above paragraph, we see the source of the “war is over, but not over” dilemma that the president and our troops at risk face in Afghanistan.

Clearly, the president and most Americans would love for peace to reign in Afghanistan, or at the very least, for Americans to no longer suffer the consequences of the complete lack of anything like peace in Afghanistan. While President Obama mentioned the sticky detail of the “remnants of al-Qaeda,” he failed to mention the larger obstacle to peace—namely, the Taliban and its dozens of local “taliclones” opposing peace and civilization in Afghanistan.

President Obama’s commitment to a “united, secure, and sovereign Afghanistan” is in keeping with US political opinion, but is, unfortunately, not at all descriptive of the reality in Afghanistan as it was on December 28, 2014, nor as it is today.

We in the US find ourselves again in a dilemma that resembles President Lyndon Johnson’s view of the Viet Nam war. The war that Johnson saw, understood, and valiantly attempted to manage was not terribly similar to the war that actually occurred in Viet Nam. My guess is that in reality, President Obama understands Afghanistan better than his speech would indicate, so I assume that the speech was a political exercise rather than an expression of the president’s real view of Afghanistan.

He knows it’s not over.

While most of us in the US were glad to see the Afghan people conduct their first democratic election, that election, unfortunately, has not led to any sign of unity in the Afghan political system. Being ever the incurable optimist, I hasten to point out an interesting, though less noticed, phenomenon in Afghanistan. The young people of Afghanistan are learning to use social media, and judging from their correspondence, they are more practical, more civilized, more intelligent, and far more united than their elders. They have clearly expressed that they want a functioning democracy and won’t let tribal loyalties and factionalism get in their way.

In practical terms, it seems that we will have about 11,000 US forces in Afghanistan instead of the previously estimated 10,000. NATO will continue in its feeble efforts by maintaining 2,000 troops in Afghanistan to back up the usual idealistic and vague European political agenda.

Political speeches and media trends aside, what might we reasonably expect from Afghanistan?

My best guess is that any hope for civilization in Afghanistan resides with its not-yet-empowered youth. Too many of Afghanistan’s most educated people reside outside of Afghanistan, and most of them have no intention of returning home.

We have to consider that the ongoing national political schizophrenia in neighboring Pakistan will continue to allow various tali-brand bandits to wage war against the Afghan people.

The American public’s dwindling enthusiasm for paying the Afghan bills in blood and treasure, combined with the fact that most European nations have never been willing to contribute much more than rhetoric to the Afghan war, means that the US will remain in combat in Afghanistan as quietly as possible for another ten years. As the next generation of Afghan leaders gradually replaces the current gang of intellectually arthritic old men that currently fail to run their country, hope for a “united, secure, and sovereign Afghanistan” will finally become more than political dogma.