Bayard & Holmes Personal History Improvement–Bringing the World a Better Past 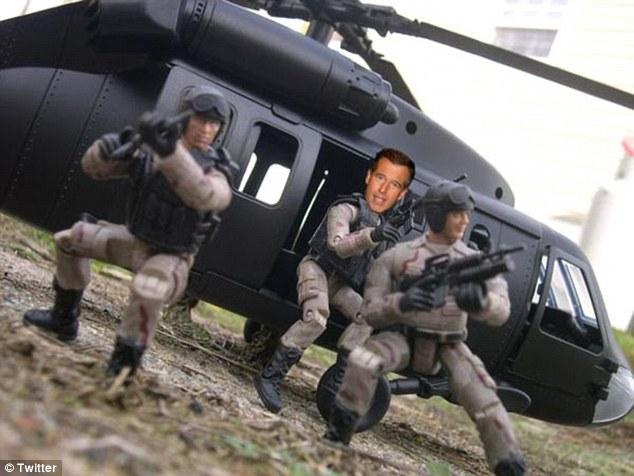 The hot media story has been the NBC anchor Brian Williams debacle. In an apparent attempt to burnish his personal image, Brian claimed to have been in a helicopter that was hit by an Iraqi RPG, when in fact he had been in a different helicopter. 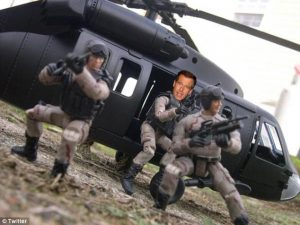 My personal reaction was wonderment that anyone would be surprised that a TV reporter lied. Given the fantastic liberties that news outlets take with basic facts on important news stories, Williams’s helicopter fantasies don’t quite stir my passions. Not even when he compounded his dilemma with an apology that amounted to another obvious lie, claiming that his memories were confused. If lying disqualified news reporters, would the networks have any reporters left? What network really wants to hire people that will ignore their corporate agenda and simply tell the truth?

After shrugging my shoulders, I quickly realized that the Brian Williams problem was yet another wonderful opportunity for the Bayard & Holmes Business Conglomerate. Brian Williams’s real mistake was not that he fabricated what was, by his standards, a heroic tale, but that he did such a sloppy job of it. Clearly, he could have used professional help, and that’s where we come in.

Why should veterans hog all the attention when war stories are being swapped at the neighborhood barbeque? Why should selfish CIA field operatives be the only ones to access professionally constructed legends? Tired of hearing other peoples’ stories about wartime memories while you’ve never been closer to real combat than Black Friday at Walmart?

Don’t be a forgotten victim of your own mundane past.

As an American, or as an illegal alien with a valid credit card or cash, you have a right to not be marginalized when others become the center of attention. Have your credit card handy and contact our Personal History Specialists to receive your very own PTSD-inducing combat history that will have your friends marveling!

Our best selling Back In Nam product is growing in popularity, even as you read this news release. This gem provides you with heroic tales of jungle combat as a member of the Special Forces group of your choosing.

You say you want to tell everyone about your great times with Delta Force in Nam? Why not? So what if Delta forces didn’t form until well after the Viet Nam War ended? When uncooperative listeners point out this historical inconsistency, you’ll be prepared to fire back details about how your Special Forces were so special that only you and a few other super heroes were aware of their existence.

What about when people wonder how you survived receiving nine Purple Heart commendations before your eighteenth birthday? No problem. We’ve contracted with brilliant medical consultants to provide you with the convincing battle scars that you’ll need to back up those fantastic combat stories. After a brief vacation at the Cholo Loco Discount Upholstery Shop in the popular resort town of Tijuana, Mexico, you’ll look like you’ve crashed and burned in half a dozen thrilling helicopter missions.

For added evidence of your exciting past, our CGI team will provide you with convincing combat footage of you personally strangling Ho Chi Min with the gauze from your first aid kit while simultaneously roundhouse kicking General Nguyen Giap in the head.

What’s that you say? Your grandfather served in Nam, and you need something more recent? No problem. This month only, we are selling When I Was In Iraq packages with no payments due until April! These packages include pictures of real vets wrapped up in so much modern combat gear that you can’t tell who the hell they are anyway.

US Army Spc. Joshua Rachal in Baghdad
Image by US Army, public domain.

Since the Iraqi Army has no desire to use the billions of dollars in combat gear that we give them every year, they’ve agreed to a generous pricing structure for cool-looking, authentic personal gear from the Iraq War. These like-new items have suffered no wear and tear other than being stored in vast warehouses in Iraq and Kuwait. Our equipment specialists will add a respectable amount of scratches, tears, and scuff marks before shipping you your boots, uniform, pack and other gear to make it look as though this equipment was actually worn by a soldier in Iraq!

You find Iraq war stories too cliché and need something more original? No problem. For a small fee, our exclusive Frequent Lier card holders can obtain the Bayard & Holmes When I Stabbed Gadhafi to Death Package.

This package comes complete with authentic Bedouin clothing, sand-encrusted sandals, and a bloodstained Marine Corps Issue OKC-3s bayonet. After practicing with the Bayard & Holmes Libyan Militia Histrionics Language Kit, you will be able to re-enact that exciting day for your friends and neighbors. Our CGI team will even insert you into the famous “Gadhafi’s Last Moments” video, and no one will be the wiser that you were actually at home drinking beer that day.

What if heroic military service isn’t your fantasy? No problem. We even have a package that allows you to beat Brian Williams at his own game.

The US government sometimes loses a helicopter at a time and location where a US helicopter supposedly should not be present. We’re offering Uncle Sam help with these often embarrassing Whoops-We-Lost-Another-%&$@-Helicopter moments. We’ll fly you to the scene of the wreckage and film you in blood-stained clothes as you explain to the audience how you are the lone survivor from your foreign aid team, and how the rebels du jour shot you down while you were rescuing local orphans from the latest and most fashionable third world epidemic.

At no extra cost, we’ll include a screaming toddler to add to the dramatic impact. With a little effort on your part, you might even convince NBC to hire you as Brian Williams’s replacement. 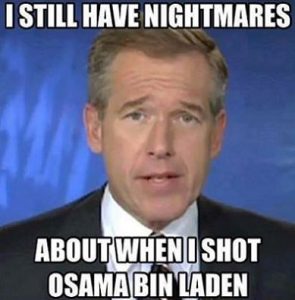 Remember. Your future is yours to create, but your past is best purchased from us.

Bayard & Holmes . . . Bringing the world a better past.