What Hollywood Can Learn from West Point 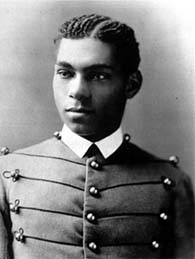 Henry was born a slave in Georgia in 1856. After the Civil War, he attended Atlanta University, and during his first year, he received an appointment to West Point from US Congressman James C Freeman.

Henry was not the first African-American to attend West Point, but he was the first to graduate.

Life at West Point has never been easy for any cadet, but black cadets suffered the extra stress of racial hatred from some of the senior white cadets. Yet, Flipper survived the rough treatment and graduated.

After receiving a commission as a second lieutenant in the US Army, Flipper was assigned to the US 10th Cavalry Regiment in the Oklahoma Indian Territory, a regiment of black soldiers traditionally led by white officers.

However, the 10th Cavalry moved to Texas before Flipper arrived. Flipper spent three months in Oklahoma supervising engineering projects, including road building and telegraph line construction, before he received orders in October to travel to Texas to join the 10th.

Lieutenant Flipper reported to Captain Nicholas Nolan, and Nolan assigned him to command A Troop of the 10th Cavalry. Nolan treated Flipper as he would any new lieutenant, which engendered hostility from some of the white officers at the fort. Flipper would at times eat at captain Nolan’s dinner table with Nolan’s family. When some of the officers complained, Nolan explained that Flipper was an officer and a gentleman like any other officer at the post.

When the 10th Cavalry was sent to Fort Elliot in Texas, Captain Nolan became the fort commander. He appointed Flipper as his adjutant.

Flipper earned the jealousy of those officers with racist tendencies, and, according to Flipper’s writings, not all of his critics hid their anger. When Captain Nolan’s sister-in-law, Mollie Dwyer, visited Fort Elliot, she and Flipper became friends and would go riding together. Although Captain Nolan and his wife were happy that Mollie was in the company of a trustworthy officer, not everyone at the fort was willing to tolerate a white woman being escorted by a black officer. The disgruntled soldiers began a smear campaign against Flipper. Apparently, officers further up the chain of command accepted Captain Nolan’s opinion of him, and the allegations of impropriety were ignored.

In late 1879, Fort Elliot became involved in a murky plot of sorts.

One night, a federal marshal, Marshal Norton, arrived at the fort and turned over a local judge and some of his supporters for imprisonment. Captain Nolan was required by law to act as jailer for any prisoners turned over by US marshals, but he was suspicious of Norton and his cohorts. The telegraph line at the fort went dead, confirming his suspicions.

Nolan had Flipper and two troopers leave the fort in the middle of the night with the prisoners and escort them to another fort. Marshal Norton and his posse became aware of the midnight prisoner shuffle. They tracked down Flipper’s party and arrested them. One of Flipper’s troopers escaped pursuit and managed to warn Captain Nolan. Captain Nolan lead out a patrol, and they were able to catch up with the marshal.

Now pay attention. This gets tricky.

In late 1880, Flipper was assigned to Fort Davis and appointed as the fort’s quartermaster officer. In March of 1881, Colonel William Shafter took command of Fort Davisand relieved Lieutenant Flipper of his responsibility as quartermaster officer without any explanation. Shafter was outspoken about his dislike of having black officers in the Army.

When money went unaccounted for in the commissary records, Shafter blamed Flipper. He was court marshaled for embezzlement and “conduct unbecoming an officer.” The court found Flipper innocent of the embezzlement charges, but guilty of the catch-all charge of conduct unbecoming an officer. He was dismissed from the Army. I have been unable to locate any evidence of any serious wrongdoing to support his dismissal.

After leaving the Army, Flipper pursued a successful engineering career in Texas, Mexico, and Venezuela. He volunteered for service in the Spanish-American war of 1892, but his petition for reinstatement never received review.

In 1921, Secretary of the Interior Albert Fall appointed Flipper as his assistant.

Henry Ossian Flipper passed away in Atlanta Georgia in 1940. In 1976, Flipper’s descendants petitioned the Army to review his case.

The Army no longer had authority to overturn the century-old court-martial conviction, but it found that the conviction was unjust, and it was able to issue a posthumous honorable discharge.

In 1997, a law firm applied for a full pardon for Flipper.

Applications for executive pardons for courts-martial are almost always dismissed as a matter of policy. Fortunately, President Clinton took time to actually review the application, and he issued a full pardon of Henry Flipper in 1999. The pardon came 59 years too late for Flipper to enjoy the moment of vindication, but at least the record has been set straight for his family.

Henry Flipper’s history is important because it shows that as early as 1873, when Flipper entered West Point, some of the US Army’s leadership recognized the simple truth of human equality.

This was long before African-Americans were even able to vote in many districts throughout the nation. When we juxtapose Flipper’s 1877 graduation from West Point with Rosa Park’s 1955 refusal to surrender her bus seat to a white rider, it forms something of a kaleidoscopic image of the irregular and somewhat jagged process of social change in America.

Often, civilians view the US Army as being ruled by medieval-minded WASPs who are doing their best to protect their Army from the dangers of progressive thinking. But in the case of Henry Flipper, the West Point establishment was one of the more progressive segments of society in 1877. It was an imperfect Army, and in the end Flipper did, indeed, fall victim to racism. But Flipper got further there than he could have in most national institutions in 1877.

When Barack Obama became the first African-American elected President in 2008, Hollywood and TV media outlets were quick to point out that they had been “ahead of the curve” because they had portrayed African-American presidents on the screen. My, oh, my! How generous those Hollywood folks are.

I wonder when the Hollywood Guardians of Progressive Thinking and their cousins in TV World will catch up to the 1877 West Point staff or the modern American voters. It will be a great day for America if it ever happens.