The Medal of Honor Recipient Who Wouldn’t Fight 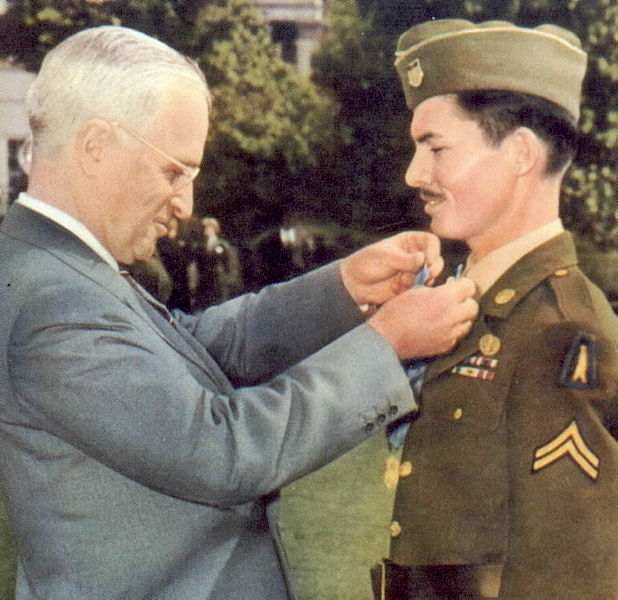 During WWII, dozens of the bloody campaigns raged around the globe, involving millions of US military personnel. Four hundred sixty-four of those Americans received the Medal of Honor — two hundred sixty-six of them posthumously. Most of the recipients received the medal for incredible feats of valor while attacking the enemy. However, in a few instances, the medal was given to a recipient that never attempted to harm the enemy. Desmond Doss, a conscientious objector from Virginia, was one of those recipients. 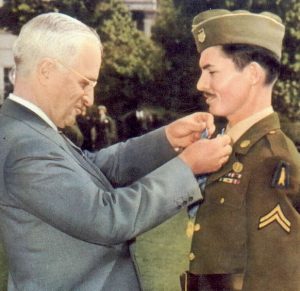 Seventy years ago, on October 12, 1945, President Truman awarded Desmond Doss the Medal of Honor for his conduct during the US campaign to take Okinawa from the Japanese imperial forces.

The US undertook the invasion of Okinawa to establish large air bases for operations during the anticipated invasion of Japan. On April 1, 1945, 250,000 combat troops, organized into three US Marines Divisions and four US Army Divisions, stormed the shores of Okinawa.

The landings, themselves, were conducted without much resistance from the approximately 90,000 Japanese defenders. By 1945, the Japanese had decided that it was unwise to expose their forces to vastly superior US naval gunfire and US air support on the narrow beach zones where the concentrated fire would devastate them. Instead, they built strong defensive positions inland from the beaches, where the US advantages in naval gunfire and air support were negated by the close proximity of the attacking US troops.

To defend Okinawa, the Japanese military had perfected two other major defensive innovations.

The first of these was Kamikaze (Divine Wind) suicide air units. Most of us are familiar with the Kamikaze fighter plane units that were unleashed with devastating effect against the US Navy’s amphibious fleet during the US invasion of the Philippines in October of 1944. By the time the US invaded Okinawa, the Japanese had further refined their aerial Kamikaze weapons. In particular, they had developed a man-guided rocket-propelled bomb. These fast moving rocket bombs were difficult to shoot down, and, in combination with the slower Kamikaze fighter craft and light bombers, they managed to kill nearly 5,000 US sailors while sinking twenty amphibious assault ships and twelve destroyers.

On land, the Japanese introduced their second highly effective and savage innovation – the child suicide bomber. The occupying Japanese conscripted middle school children to conduct suicide bomb attacks against the invading US troops. US Marines and soldiers were hesitant to shoot at civilians that ran toward their lines because some of them were simply trying to escape the Japanese. Unfortunately, many of the children carried explosives under their loose fitting shirts. In some instances, the Japanese troops sent forward young mothers with babies. When US troops left their cover to try to assist the women and babies, Japanese snipers killed the US rescuers.

This combination of the aerial Kamikaze and the child suicide bombers greatly complicated the battle for the US forces.

The Japanese commanders in Tokyo, pleased with the effectiveness of the suicide bombers, ordered the conscription of all boys aged fifteen and older and all girls aged seventeen and older to be trained and equipped as suicide troops for the defense of the home islands against the awaited US invasion.

Such was the savage nature of the fighting on Okinawa, which made Desmond Doss’s conduct all the more remarkable.

Because of his religious beliefs, Doss was a conscientious objector. He did not want to engage in combat. His beliefs, however, did not keep him from serving in the US Army as a combat medic.

The text of Doss’s Medal of Honor citation speaks for itself, telling the story of his remarkable courage under fire:

“He was a company aid man when the 1st Battalion assaulted a jagged escarpment 400 feet [120 m] high. As our troops gained the summit, a heavy concentration of artillery, mortar and machinegun fire crashed into them, inflicting approximately 75 casualties and driving the others back. Pfc. Doss refused to seek cover and remained in the fire-swept area with the many stricken, carrying all 75 casualties one-by-one to the edge of the escarpment and there lowering them on a rope-supported litter down the face of a cliff to friendly hands. On May 2, he exposed himself to heavy rifle and mortar fire in rescuing a wounded man 200 yards [180 m] forward of the lines on the same escarpment; and 2 days later he treated 4 men who had been cut down while assaulting a strongly defended cave, advancing through a shower of grenades to within 8 yards [7.3 m] of enemy forces in a cave’s mouth, where he dressed his comrades’ wounds before making 4 separate trips under fire to evacuate them to safety. On May 5, he unhesitatingly braved enemy shelling and small arms fire to assist an artillery officer. He applied bandages, moved his patient to a spot that offered protection from small arms fire and, while artillery and mortar shells fell close by, painstakingly administered plasma. Later that day, when an American was severely wounded by fire from a cave, Pfc. Doss crawled to him where he had fallen 25 feet [7.6 m] from the enemy position, rendered aid, and carried him 100 yards [91 m] to safety while continually exposed to enemy fire. On May 21, in a night attack on high ground near Shuri, he remained in exposed territory while the rest of his company took cover, fearlessly risking the chance that he would be mistaken for an infiltrating Japanese and giving aid to the injured until he was himself seriously wounded in the legs by the explosion of a grenade. Rather than call another aid man from cover, he cared for his own injuries and waited 5 hours before litter bearers reached him and started carrying him to cover. The trio was caught in an enemy tank attack and Pfc. Doss, seeing a more critically wounded man nearby, crawled off the litter; and directed the bearers to give their first attention to the other man. Awaiting the litter bearers’ return, he was again struck, by a sniper bullet while being carried off the field by a comrade, this time suffering a compound fracture of 1 arm. With magnificent fortitude he bound a rifle stock to his shattered arm as a splint and then crawled 300 yards [270 m] over rough terrain to the aid station. Through his outstanding bravery and unflinching determination in the face of desperately dangerous conditions Pfc. Doss saved the lives of many soldiers. His name became a symbol throughout the 77th Infantry Division for outstanding gallantry far above and beyond the call of duty.”

After his discharge from the US Army, Desmond Doss spent five years in treatment for his injuries and for tuberculosis. He died in March, 2006.

Of the thousands of stories of outstanding courage during WWII, Desmond Doss’s story is one of the most remarkable. He did not act with a burst of adrenaline for a few minutes to achieve remarkable results, but rather he acted calmly and repeatedly risked his life under fire for several days in order to save his wounded comrades. In the midst of one of the most savage battles of history, Desmond Doss, conscientious objector and Medal of Honor recipient, still stands as an outstanding example of courage and compassion.

Pfc. Doss’s story is being brought to the big screen on November 4, 2016, in the movie HACKSAW RIDGE. Watch for the Bayard & Holmes review.

Piper Bayard is an author and a recovering attorney. Her writing partner, Jay Holmes, is an anonymous senior member of the intelligence community and a field veteran from the Cold War through the current Global War on Terror. Together, they are the bestselling authors of the international spy thriller, THE SPY BRIDE.

Watch for their upcoming non-fiction release, CHINA — THE PIRATE OF THE SOUTH CHINA SEA.

Keep in touch through updates at Bayard & Holmes Covert Briefing.