With the voice of over forty-five years of experience in the Intelligence Community, Bayard & Holmes explore key moments in the history of espionage.

• The rise of spy ships.
• How torpedo boats faced the might of the Soviet Union.
• A blow-by-blow of the USS Liberty incident.
• The North Korean capture of the USS Pueblo and her crew.
• Hitler, Stalin, Mussolini, and the failed Operation Barbarossa.
• The South’s fatal miscalculation.
• The greatest US intelligence failure of all time.
• Andrei Tupolev and the explosion of the Konkordski.
• The U-2 incident and the capture of Gary Powers.
• The rise and fall of Sicily’s Cosa Nostra.
• How China spanked Vietnam.
• Vladimir Putin, the living legacy of the KGB.

Threads of the Shadow World history weave the patterns of today. 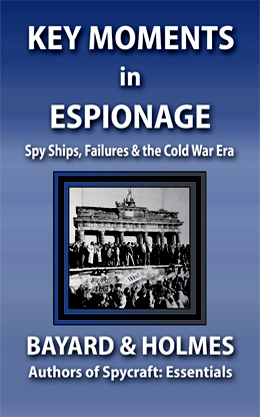