THE LEOPARD OF CAIRO

“Here is a lightning-fast tale of intrigue, lies, and the mother-of-all terrorist plots.

John Viera left his CIA fieldwork hoping for a “normal” occupation and a long-awaited family, but when a Pakistani engineer is kidnappedd from a top-secret US project and diplomatic entanglements tie the government’s hands, the Intelligence Community turns to John and his team of ex-operatives to investigate — strictly off the books. They uncover a plot of unprecedented magnitude that will precipitate the slaughter of millions.

From the corporate skyscrapers of Montreal to the treacherous alleys of Baluchistan, these formidable enemies strike, determined to create a regional apocalypse and permanently alter the balance of world power. Isolated in their knowledge of the impending devastation, John and his network stand alone between total destruction and the Leopard of Cairo. 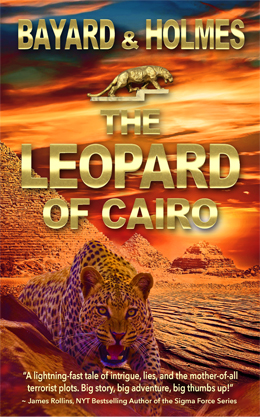