THE PANTHER OF BARACOA

“Here is a lightning-fast tale of intrigue, lies, and the mother-of-all terrorist plots.

Finally free from his gritty MI6 existence in Pakistan, Martin Blackburn is eager to embrace life on a Cuban cocoa plantation to provide a conduit for the United Kingdom to surveil Russian construction of a military and nuclear base.

Just as he releases the mental burdens of the underworld hellholes, a beautiful, black-haired woman approaches Martin on the beach and hands him a USB drive. “You must take this and leave Cuba forever. Once you pass it on, you will no longer be safe in the West, but millions will suffer if you do not expose this plot.”

Suddenly, thugs are shadowing Martin’s every step, and MI6 is sending him back to Quetta for an undisclosed mission. Other than his American friend, John Viera, Martin no longer knows who he can trust, but only that there is a mole in the upper echelons of the UK government.

Friend becomes foe and hunter becomes prey when a new predator springs into the shadow world, and Martin is ensnared in the clandestine jungle of the Panther of Baracoa. 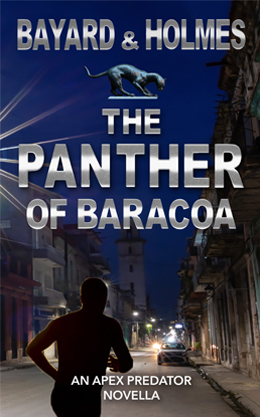