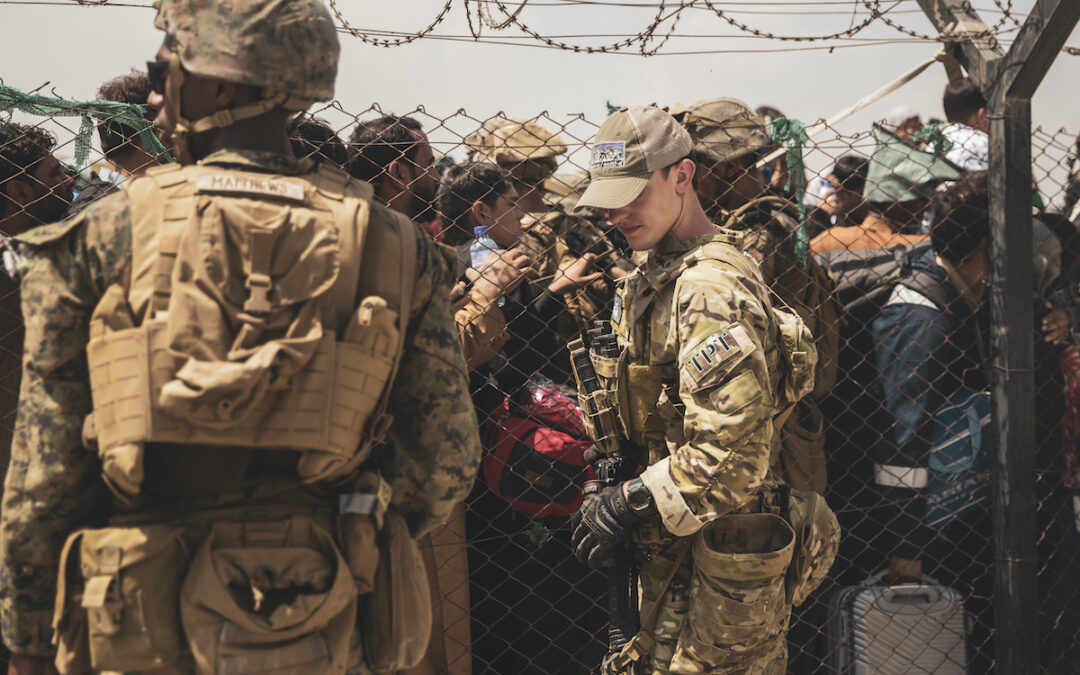 I’ve been compiling news and links on the Afghanistan Evacuation Crisis, arising after President Biden’s withdrawing of the US military ahead of securing any American, NATO, other allied citizens, or our Afghan interpreters, assets, and their families. Since the last post, Afghanistan Crisis Updates Aug 17 – 24, two terrorist suicide bombers attacked the crowds at Hamid Karzai International Airport’s Abbey Gate near the Barron Hotel in Kabul. Reports that at least 12 and possible as many as 20 or more were killed, including four US troops. We have also learned that 20+ California school children and 16 parents are among the abandoned Americans, and the US military is continuing withdraw by the order of President Biden. Civilian efforts to continue rescues are being thwarted by both the Taliban and by US officials. Taliban are no longer allowing any Afghans to depart the country. . . . And deadline of Tuesday, August 31, draws nigh.

Update 1:30 CST: Since posting an hour ago, some reports say at least 10 US troops were killed by the suicide bombers. 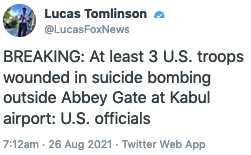 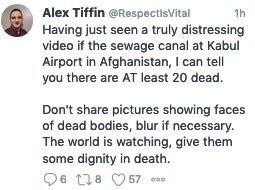 Reports that hundreds of ISIS (who are not aligned with Taliban) are on the ground and in the crowds in Kabul. Expect more attacks.

An Italian news agency reports that an Italian evacuation flight was fired on as it was leaving the airport in Kabul. The flight was undamaged and continued. See link if you read Italian. 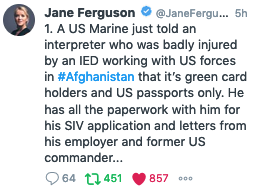 The Taliban is completely barring any Afghans from reaching the airport. Taliban is “mostly” letting Americans through to the gates, but Biden administration is telling Americans to stay away from the airport because of the attacks on them from terrorist groups. Americans left behind will only get home through negotiations with the Taliban or through “unconventional means.” Meanwhile, charter flights to bring out Afghans who helped us who hold legitimate SIVs and documentation are leaving unfilled because Taliban is not letting people through checkpoints.

See interview with Kristen Rouse, President & Founder of the NYC Veterans Alliance and Board Member of Iraq and Afghanistan Veterans of America, at https://twitter.com/brikeilarcnn/status/1430841026512670722 for reports from the ground. To say it’s bad is a vast understatement.

Our US military is being ordered by the Biden administration to turn away Afghans with legitimate visas and supporting documentation in spite of the deals the United States made with them.

Digital Dunkirk and other civilian organizations are still desperately working to get Americans and Afghan allies out of this Hellscape. 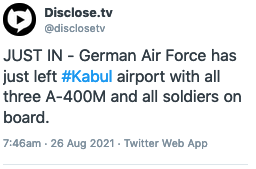 Reports the German military is gone from Afghanistan. The Germans were helping with security at the airport as they evacuated as many Germans and allies as they could in the time the Biden administration gave them.

US military, under orders from the White House, continues to depart from Hamid Karzai International Airport.

Propaganda efforts are intensifying to cast everyone who holds Biden responsible as the Commander in Chief who chose to pull out the US military and close Bagram Air Base before securing American and allied civilians as “Trumpers” to be dismissed and reviled.

Beware of propaganda! It is starting to flow fast and furiously! This from Russian Times. Note the photoshopping onto the backpacks. Seriously, folks. This crap comes from ALL sides. 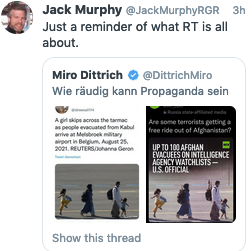 The Taliban tried to get their hands on the Afghan central bank’s nearly $10 billion in reserves, but most of the money is in New York, Yahoo! News, Natalie Musumeci, August 25

A Taliban-Run Afghanistan Will be Less Isolated than the West May Hope, The Economist, August 18

More than 20 students and 16 parents from the Cajon Valley Union School District in El Cajon, California are among the stranded Americans in Afghanistan. They went there on a summer vacation trip. . . . Yes. Really. Link below.
By the orders of President Biden, US troops began to withdraw from the Hamid Karzai International Airport, which they were securing for all of the evacuating nations from the NATO countries to India and Nepal and others. Our allies were not notified before this withdrawal began. This means they are put into a situation of having to abandon their people, as well.
The Taliban has called reinforcements to come to the airport in Kabul.
Two American congressmen went to Kabul to see what was happening for themselves. See link below.
Tens of thousands of Americans, NATO nation citizens, citizens of our other allies, and Aghan interpreters, assets, and their families will be abandoned to Taliban rule. The White House is pushing hard the notion that things would have happened this way no matter what, and that there was no other alternative (like securing out citizens before pulling out the military) if we were going to leave Afghanistan.
Heavy propaganda campaign beginning to blame it all on Trump, saying he diabolically planned all of this and arranged it with the Taliban before leaving office.
One good thing . . .

DISPATCH: Inside Kabul Airport — ‘A Death Metal Show With One Exit. And the Place Is on Fire’, Coffie or Die, Jariko Denman, August 24