Events in Libya are fast and furious right now, and many are wondering what Libya will look like in the near future. Let’s start with a brief history so as to remind ourselves that beyond the painful glaring light that is Gadhafi, there is a country of sorts.

Around 1000 B.C., the Garamantes, a tribal people descended from Berbers and Saharan herders, inhabited the area of the Fazzan in southern Libya.

In the 7th century B.C., Phoenicians got lost on a Saturday boat trip and decided to stay in what is now western Libya. The fishing was ok, and the few locals couldn’t gather enough strength to evict them. Greek tourists continued to enter the area without visas and refused to go home. They founded a colony of illegal aliens called Cyrenaica. Claims as to dates and times of this colony remain confusing. The Greeks, Romans, Libyans, and Egyptians were still arguing about it when I left the cafe in Benghazi.

Around 600 B.C., Carthaginians heard about the fishing and arrived to set up housekeeping.

In 158 A.D., long before the first publishing lawsuit ever occurred in Manhattan, Libyan Berber Apulieus of Madaura published The Golden Ass. You might have read it. Your high school teacher called it The Metamorphosis. The story is about a fool who dabbles in magic and accidentally turns himself into a mule. Yes, Libyans have been writing decently for a long time. They do not all speak and act like the Clown Prince Gadhafi.

Life cruised along with lots of trading and fishing. Thanks to overgrazing and dry conditions, Libya lost most of its arable land and never regained it. This ecological disaster still impacts Libya today. In 100 A.D., he who controlled Libya’s scarce water controlled Libya. In 2011, he who controls Libya’s scarce water controls Libya.

Then, in 643 A.D. the Muslim wave came over the horizon. They were organized and obedient to their generals, and they conquered and kept going. They took their religious crusade on to Europe, via Spain. That wave didn’t stop until Charles Martel, a.k.a. The Hammer, put up an organized fight at Tours, France in 732.

Libyans kept fishing, trading, and herding in Libya, and then, in the 1500s, the Ottoman Empire showed up and took over. Many Libyans were unhappy about the new regime, but the Ottomans were unmoved.

In 1801 the Libyan, Tunisian, and Algerian coasts had long been controlled by pirates. The pirates left British and French ships alone because they had glimpsed the British and French navies. They were not crazy. At that time, there was almost no US Navy. As a result, the pirates took any and every American ship they wanted, kept them, and ransomed the American sailors. 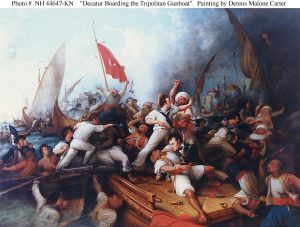 Also in 1801, President Thomas Jefferson made his famous “we won’t deal with terrorists” speech. A foolhardy young American naval lieutenant by the name of Stephen Decatur took a ridiculously small force of ships and men to the region to enforce a “no pirates zone.” The Pasha laughed, France laughed, and England, having the biggest and best navy, laughed the loudest. The King of Spain, on the other hand, said, “Don’t laugh. I know these people. These Americans are trouble.”

Stephen had the foresight to bring two important things with him. He brought Marines. . . . They don’t laugh, ever. . . . He also brought some hard-drinking Redsox fans from south Boston. Between the deadly Marines and fourteen years of nonstop chanting of, “The pasha sucks,” the pirates wisely give up.

In 1815, the pirates signed a treaty agreeing to only pick on the English and the French. Decatur, in his Farewell to Libya speech, said, “Don’t ever piss us off again. Next time, we’ll bring carriers and even more Marines.” Libya believed that for a long time.

In 1911, Italy offered Libya the tried and true regime-change bargain to get rid of the Ottomans, and Libya accepted. Life with the Italians was more annoying than life with the Turks had been, particularly when the Italians pressed thousands of Libyan men into twentieth-century slavery. The Italians also stole Libya’s oil, but they left most of the women alone. And then again, there’s that delicious Italian cooking. Like in Brooklyn, there’s an Italian restaurant on every other corner in Tripoli. Nevertheless, nobody likes having their sons taken away into slavery, and the Libyans don’t forget.

During WWII, the Italians, under Mussolini, over-extended themselves in the hope of bowling the English out of Egypt and taking the Suez Canal. In February, 1941, Erwin Rommel took his Afrika Korps into Libya to reinforce the Italians.

In 1942, an annoying man wearing a strange, ill-fitting hat showed up and made trouble. . . . No, not Moammar. . . . Bernard Montgomery. The guy was an egomaniacal jerk, but Churchill liked him, and he had a pretty good English army with him, including some hard-brawling Australians and stubborn New Zealanders. After a brief discussion with the Italians and a prolonged and bitter fight with the Afrika Korps, the Germans left. Rommel had better tanks, but Monty had those iron Aussies. When the Germans retreated, the Libyans were mildly happier for it. The British did not enslave the Libyans. That made them far more likeable. 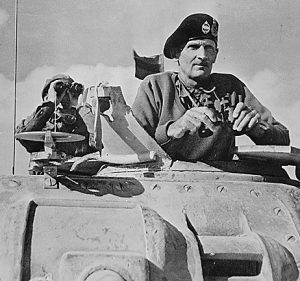 Bernard Montgomery–Wonder if this started Gadhafi down the path of wayward hats?

In 1945, a Libyan-style Kristallnacht occurred, and many of the surviving 40,000 Libyan Jews left. Some did not. Many of those that stayed were murdered in 1948. A few survived and stayed until 1968, when they were banished from Libya.

In 1956, American oil companies showed up with more cash than British oil companies and took over the show. Business tycoon Armand Hammer and Occidental Petroleum were very good at this sort of thing.

In 1969, the King of Libya traveled abroad for medical treatment, and a faction of young army officers led by a bold 27-year-old named Captain Moammar Gadhafi took power and kept it for a long time. In fact, Moammar still has it this morning as I write, and Stephen Decatur has not shown up. . . . Yet.