The End is Near (and we deserve it) . . . Dead Mice Chess Pieces 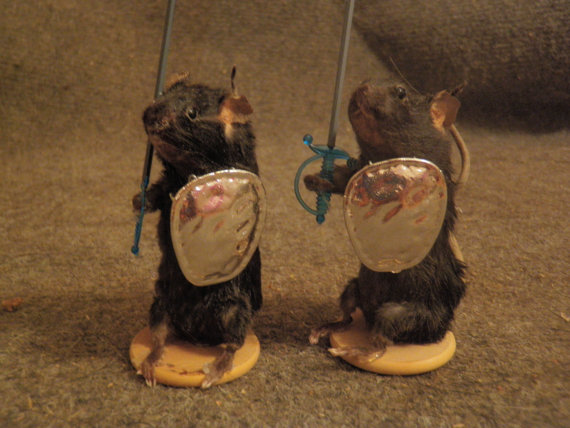 Coming Home is Harder than Fighting in the War: How Yoga Saved My Life. One soldier and yoga instructor’s story of how yoga helps people heal from PTSD. Via Christine Moore.

Colin Falconer shares some of the entrants in the Bulwer-Lytton Contest, which compares actual sentences from published novels to find the world’s worst writing. Some really funny stuff here. So Yew Want to Bee a Riter? Check out some of his other posts while you’re there. He currently has up a fascinating piece about Liz Taylor and Cleopatra.

Learn How to Self-Publish with StoneHouse Ink founder and CEO, Aaron Patterson. This guy knows what he’s doing, and he will even hold your hand.

And speaking of Boulder, a Boulder area based vocal band brought some holiday cheer to the DFW Airport this week when they were stranded along with many other frustrated, stressed-out travelers. FACE. If you’re ever in the Boulder area, they have a great show.

More than a few of us could use this one. Cold Weather Survival from the Green Beret Survival Guide by New York Times Bestseller and former Green Beret Bob Mayer.

Mom with Cerebral Palsy Transformed by Pot. This is impressive support for the value of medical marijuana. We see this woman struggle to speak through most of the video, but then, once she’s had a couple of puffs from her pipe, her speech is almost normal.

I think it never occurs to most minorities that many white people are also the victims of racism, including job discrimination, verbal abuse, and even deadly violence. Mainstream media and PC dogma try to tell us otherwise, or worse, that it’s somehow justified if it’s done to white people. I’ve personally known a lot of “Rachels” in my life, and I love this video from Harlem–an episode of What Would You Do? In a world where the media overwhelms us with stories of jerks and criminals, it’s always good to be reminded that there are decent, tolerant people everywhere of every race. Via Bestselling Author Kristen Lamb.

All the best to all of you for a week of lively games.