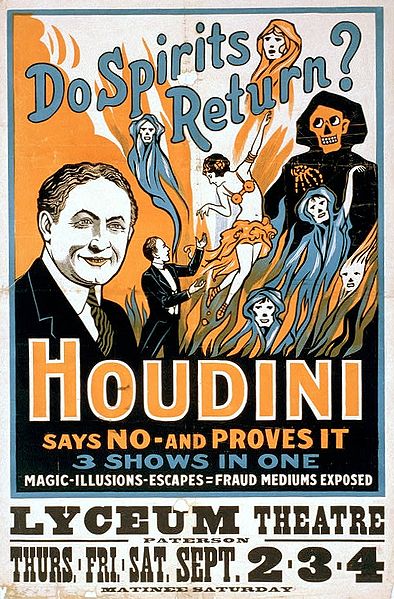 Today we welcome historical mystery writer K.B. Owen to tell us about Ghostbusting in the early 20th century. K.B. taught college English at universities in Connecticut and Washington, DC and holds a doctorate in 19th century British literature.  A long-time mystery lover, she drew upon her teaching experiences to create her amateur sleuth, Professor Concordia Wells. She currently lives in Virginia with her husband and sons and is busily planning the lady professor’s next adventure.

You’ll find K.B.’s latest release, Unseemly Pursuits, at the links below. Be sure to enter her Big Giveaway for a chance to win the Swag Kit.

Among the joys of writing historical mysteries is running across cool nuggets of research. While writing Unseemly Pursuits, I needed to learn more about late-19th century spirit mediums and their tricks, which inevitably led me to some ghostbusters and absurd situations that I like to call “gotcha” moments. The public exposure was sometimes funny, sometimes pathetic. I thought I’d share some with you today.

Almost as plentiful as fraudulent mediums were the debunkers who sought to catch them at it.  Below are some of the most well-known of their time, made up of earnest scientific researchers as well as flamboyant entertainers.

After watching the Davenport brothers exhibit their “spirit cabinet,” purported to manifest spirits while the brothers were tied up inside, Maskelyne suspected fraud.  He built his own cabinet and in 1865 launched a career of stage magic that lasted decades, whereby he demonstrated how to artificially create many of the spiritualists’ effects. The picture below gives you an idea of what a spirit cabinet looked like.

Harry Houdini was the ultimate showman.  We associate him primarily with escape artistry, but many of his shows were based on re-creating spiritualists’ effects and demonstrating the fraud behind them. He was particularly impressed with researcher Harry Price’s work (below) in exposing the tricks behind spirit photography. Price’s findings enabled Houdini to duplicate the effect. Below is a photo of Houdini with the “ghost” of Abraham Lincoln (1920-30), created by Houdini to prove how easy it was to perpetrate the fraud.

Price had an impressive credentials list: he was a member of the National Laboratory of Psychical Research, London, belonged to the Society of American Magicians, and was Librarian for the Magicians’ Club of London. He authored many well-respected journal articles documenting the fraudulent techniques of spiritualists, including spirit-writing and spirit-photography. A master-conjurer himself, he could spot sleight-of-hand and other maneuvers. However, unlike other “ghostbusters,” he deeply believed in psychic phenomena and did endorse some spirit mediums. Think of him as a believer in the psychic world – as long as he could first subject it to strict scientific controls.

Dr. Henry Slade (1835-1905) was an American medium who specialized in spirit writing on slate blackboards.  “Spirit slates” consisted of two chalkboards bound together that, when opened, were said to reveal messages written by spirits.  The trick was performed by putting a blank slate on an audience member’s head, or asking him/her to hold it under the table.  Then, after a suitable interval, a chalk-written message would be revealed.  It wouldn’t be that difficult to switch out a pre-written slate, or for the medium to hold a piece of chalk in a ring and become proficient at writing under the table.

During Slade’s tour in Britain, Professor (of Zoology, of all things) Ray Lankester (1847-1929) set out to expose him.  During Slade’s seances, Lankester and another witness watched carefully. At the second séance, Lankester snatched the supposedly blank “spirit slate” to find that it had been pre-written.  Lankester published an account of the incident in a letter to the Times, and sued him. Slade was convicted and sentenced to three months of hard labor (in England, they typically used an old statute of vagrancy, originially meant for gypsies). However, upon appeal the sentence was dismissed, whereupon Slade fled England.

Sometimes a jealous rival or the skeptical onlooker can prove to be one’s undoing, which was the case with medium Florence Cook.

Florence Cook (1856-1904) began her career as a medium at 15, when she apparently levitated off the floor while with a group of friends.  Soon after, she was causing the ghost of Katie King to materialize.  Katie King was rather notorious in spiritualist circles, as she was supposed to be a murderess who, to atone for her sins in the afterlife, returned to convince people that the spirit world was real.  (I think Jacob Marley had better justification for returning to save Ebenezer Scrooge, but that’s just my opinion).  Being able to produce Katie King on demand became a profitable venture for Florence Cook. The spirit cabinet was Cook’s go-to device for perpetrating the trick.

However, success is not without its drawbacks.  Rival medium Mrs. Samuel Guppy (1838-1917), an older and, by some accounts, a less attractive woman (couldn’t find a picture to bear this out, sorry), decided to give her rival a come-uppance.  Of course, Mrs. Guppy couldn’t attend a seance of Cook’s – she was too well-known – so she enlisted the aid of William Volckman (who later became her husband).  He bribed his way in with jewelery. When the spirit appeared, he grabbed her and proclaimed the fraud. However, other attendees at the séance fought back and assisted Cook’s escape (one of them was Cook’s fiance at the time).  Volkman got a bloody nose and no proof out of the deal, for by the time they looked back in the spirit cabinet, there was Florence Cook tied up again, although her clothes were disarranged.

Cook was caught for real later, when she was pretending to be the spirit of a young girl. One of the sitters noticed the spirit was wearing a corset – not something your young Victorian girl would wear – and decided to grab the lady the next time he got the chance. He did, and the spirit cabinet was found empty, except for boots and outer garments. When the lights were turned on, there was Florence Cook, in her underwear.

So what do you think of these daring ghostbusters and their undergarment-clad targets? What fraud-perpetrators today get caught with their pants down?

Piper and Holmes, thanks so much for hosting me today. I had a blast!

It is the fall of 1896, and Miss Concordia Wells is hip-deep in the usual tumult of a lady professor’s life: classes, clubs, student pranks, and the unending drama generated by the girls she lives with on campus.  Complicating this normality is the new Lady Principal, whom the students have nicknamed “the Ogre.”  The woman seems bent on making Concordia’s life miserable.

And then there’s the exotic spirit medium, Madame Durand, who has befriended Concordia’s mother and has started a “Spirit Club” on campus.  Madame’s prognostications of doom are at first only mildly irritating – until events take a sobering turn.  An ancient Egyptian amulet donated to the college mysteriously disappears, the donor is found murdered, and his daughter – Concordia’s best friend – confesses to killing him.

Desperate for answers, Concordia unravels a 20-year-old secret, closely guarded by men now dead.  But such secrets can be dangerous for the daughters left behind, including Concordia herself.  Can she make sense of the mystery that has bound together their fates, before it’s too late?

Unseemly Pursuits is the second book of the series.  The first book, Dangerous and Unseemly, was published in early 2013.

During K.B.’s Unseemly Pursuits book tour, which goes through the first week of March, there’s a giveaway at each blog stop (including here!).  The winner, randomly drawn from the commenters at each stop, will get a free ebook copy of Unseemly Pursuits.  At the end of the tour, she’ll hold another random drawing from among the ebook winners for the final prize: a special Concordia Wells series swag package! It includes customized mug, keychain, JellyBelly mini-tin, and signed paperback copies of the first two mysteries: Dangerous and Unseemly and Unseemly Pursuits. You can read, sip your coffee, and snack on candy in unseemly style. Check the sidebar on the home page of kbowenmysteries.com for the full tour schedule and other info.