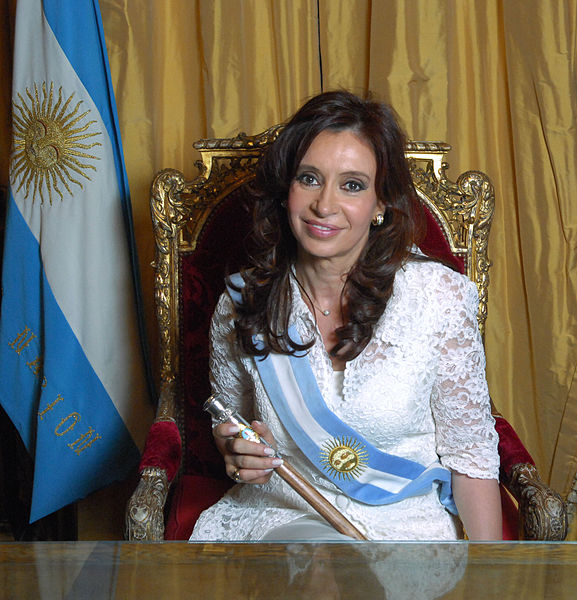 This evening I treated myself to a theatre performance, or at least to the recording of a theatre performance. On March 1, 2014, Argentine President Cristina Fernandez de Kirchner addressed the 132nd National Congress of Argentina. I was forwarded a recording of the speech, but had not taken the time to enjoy the nearly three-hour impromptu performance until last night. Former First Lady of Argentina Evita Perón was great at those well-rehearsed, seemingly “impromptu” addresses. Dream though she may, Cristina is no Evita.

Image by Presidency of the Nation of Argentina
wikimedia commons

The result was nearly three hours of speech with very little new or meaningful information. Cristina sees herself as a victim of dark conspiracies by the world’s wealthy movers and shakers. While I am no fan of the new age economic potentates, it’s not the job of the Argentine National government to whine about them. Their job is to develop effective policies to help the troubled economy of Argentina.

Cristina promised more cooperation with opposition parties, but she has yet to actually foster political cooperation in Argentina. In that sense, her speech was not altogether dissimilar to political speeches in any democratic nation.

In a theme that is gaining voice in the U.S. and some parts of Europe, Cristina claims the shale oil/gas development, known as “fracking,” will bring an economic boom to Argentina. In the U.S., the opponents of fracking like to hoist “No Fracking” signs at protests. What would it be in Argentina? Perhaps it would be something along the lines of “No Me Fraques.” It has a nice ring to it. Perhaps the more militant placards would read something like “Fraca Tu Madre.” I can’t wait.

According to Cristina, Argentina is enjoying its greatest economic growth since the Gauchos first set out to tame the Pampas. She doesn’t explain how chronically high unemployment and inflation that may be as high as 40% fits into this picture of economic Nirvana.  To many observers, the growing slums around Buenos Aires paint an altogether different portrait of Argentina’s economy.

While Cristina is only partly to blame for Argentina’s current economic crisis, she can shoulder the blame for the current failed policies that have hurt Argentina. Nationalizing the Argentine airlines and oil companies has left foreign investors unwilling to help modernize the Argentine energy sector or invest in their economy. The traditionally strong agricultural sector has grown stagnant, and in spite of food shortages around the globe, Argentina is no longer enjoying the agricultural export profits that it once took for granted.

Cristina increased taxes on rural agricultural Argentinians and indirectly instituted price controls on agricultural products. The result has been food shortages, which is bizarre because Argentina is traditionally a food-exporting nation. Held up as national heroes in the past, Cristina is now using agricultural populations as scapegoats for this problem. That sort of adversarial relationship with Argentina’s farmers and ranchers plays well in most of Buenos Aires, but it only exacerbates the decreased productivity, and in the end it hurts the poorest urban dwellers the most.

April 2, 2014, was the 32nd anniversary of the ill-conceived Argentine invasion of the Falkland Islands by a military junta that wanted desperately to distract the Argentine public from their troubles at home. Subsequent governments have marked the occasion with a more somber form of patriotism that focused on remembering the loss of life that resulted from that failed invasion. This 2nd of April, the celebration included Cristina’s introduction of a new 50 Peso note that sports a map of the Falklands, or Las Malvinas as they are called in Argentina. The Beijing government, which recently employed similar propaganda methods concerning their expansionist aspirations in the Pacific, might be wondering if they’ll get a royalty for having their idea copied. I would tell them not to bother sending a bill. Most international bills arriving at the desk of the Argentine Treasury have been ignored of late.

One of the thrilling highlights of this particular three hour Evita sequel (sans music) was Cristina’s explanation to a fascinated audience that the Falklands are used by the U.K. for all of their electronic espionage against the southern hemisphere. Apparently, Cristina has not yet heard about that marvelous new invention that we call “the satellite.” You’ll be surprised to know that the Falklands are not just a southern headquarters of British intelligence systems, but that they in fact house ICBMs for use against South America. I’m not making this up folks. Translations of her speeches are available to any member of the public that wishes to endure nearly three hours of bad theatre.

So what do Evita 2.0’s recent theatrical extravaganzas mean? Anything? The answer depends on who you ask. I will offer you my best guesses.

The U.K. Ministry Of Defense has not further reinforced the Falklands in response to Cristina’s performances. That’s because they don’t take her very seriously. The Argentine military has languished since the Falklands War. Cristina has not delivered on her many promises to the Argentine military of new and improved bases or a major expansion of the Argentine Air Force. The U.K., on the other hand, has taken the precaution of installing a modern air defense system in the Falklands and has four modern warplanes stationed there. And no, there are no atomic weapons on the Falklands.  Well, you say, certainly she would have rebuilt the Argentine fleet by now. No. She is patiently waiting to commission two modern carriers that are being built. Even though the U.K. Royal Navy currently has no carriers either, Argentina is still at a disadvantage. In all, whatever Falklands invasion Cristina Fernandez pretends to dream of won’t become a reality in the near future.

As for Cristina’s “all new, more whitening power, economic detergent,” don’t expect much change. While some critics of the Fernandez Kirchner Theatre Company are willing to compare Argentina to Venezuela, I don’t see them slipping that far. Cristina and her supporting cast can no longer count on automatic middle class support for radical economic reforms. She’s all but run her course. As well as I can guess, Argentina is unlikely to improve much in the near future, but it’s not likely to get much worse at this point. The socialist sky is not quite falling in Buenos Aires.