On February 23, 2014, with the help of ethnic Russians in Crimea, Russia’s special forces and intelligence services stepped up their pro-Russian campaign to a degree that signaled that a Russian invasion and annexation of the Crimean region was likely to occur. Emboldened by Russian military support, pro-Russian protesters in the area became more violent and more demanding.

During the last three years, national sentiment in Ukraine has shifted toward closer ties with Europe. How and when, not if, Ukraine would enter the European Union was the topic of daily debate in Ukraine. While Europeans, including most Ukrainians, were forging those closer ties, the infamous Dancing Bear of Moscow, Vladimir Putin, began to formulate a very different view of Ukraine’s future.

Prior to February of 2014, as these tensions played out in Ukraine, Western nations were relying on two basic strategies. The strategy pursued by most Western nations ranged from “Where is Ukraine?” to “How soon can they join the EU?”  The US pragmatically pursued a more focused policy—the “I hope that all goes well and nothing bad happens in Ukraine.”  Once a Russian invasion of Crimea was imminent, the West quickly reacted with new strategies. Most European nations seemed to be relying on the US to “do something.” The US responded by upgrading its own strategy to “Gosh, I really, really hope nothing bad happens in Ukraine.”

On February 28, 2014, the not-so-sneaky Russians did their best impersonation of a “sneak attack” in Crimea. All the West’s best hopes and wishes had not prevented the obvious. US President Obama (a.k.a. Dances With Bears) and other Western leaders quickly announced that there would be “consequences” for Russia in response to their invasion of Ukraine. Predictably, Putin responded by claiming that Crimea belonged to Russia all along. He then reminded Europe that they like Russian gas supplies.

As expected, the “consequences” promised by the West have been mild.

Moderate economic sanctions and a list of Russians who will not receive US entry is all it amounted to.  Across Western Europe, the political rhetoric varied from near silence to mild displeasure. Putin is probably thrilled by this lack of a coordinated response on the part of the West.

Since February, Russia has officially annexed Crimea and continues to orchestrate, supply, and partially man protests and riots in Eastern Ukraine. Russian mechanized forces are staged along the Russian Ukraine border.  So now what?

On May 7, Vladimir Putin gave a televised speech to the Russian people. The speech was the usual double talk that we can always count on Putin to deliver. Here is a small, translated excerpt of Putin’s speech. “We must look for ways out of the situation as it is today. We all have an interest in ending this crisis, Ukraine and its people above all. Thus I say that we all want the crisis to end as soon as possible and in such a way that takes into account the interests of all people in Ukraine, no matter where they live. The discussion with Mr. President showed that our approaches to possible solutions to the crisis have much in common.” 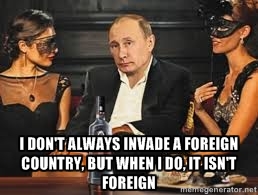 When he said “Mr. President,” Putin was referring to the visiting president of Switzerland. As far as his claim that they share “much in common,” it’s true in the same sense that the chicken and the fox might momentarily share the same hen house. In case you wonder, the translation is the official translation to English done by the Kremlin media office. As usual, Putin sounds semi-conciliatory, and as usual, his words don’t mean much except to the Russian public. In the same speech, Putin directly contradicted his own foreign minister by claiming that he supports the upcoming May 25 elections in Ukraine as “a step in the right direction.”

Fortunately, most Western leaders are responding to Putin’s speech with muted skepticism.  A few Putin admirers and the occasional innocent have welcomed Putin’s speech as a turning-point in the Ukraine crisis. Putin’s military dispositions on the Ukraine border and his country’s ongoing operations in Eastern Ukraine are a very clear measure of Putin’s actual intentions. In light of that, the West should formulate a united response to Russian aggression. That response should include increased economic sanctions.

Thus far, the economic sanctions have had a small negative impact on the Russian economy. If those sanctions are increased and continue in force, the impacts will be far more significant. Russia has significant foreign debt in the form of bonds. As the trade value of those bonds continues to drop and interest rates rise, Russian companies will find it difficult to finance growth. That will drive up unemployment to levels that will not keep Russians happy with Vlady the Dancing Bear.

Thus far, one positive development has occurred as a result of Putin’s invasion of Ukraine. Europeans, especially Eastern Europeans, have prioritized finding new sources of natural gas so they can avoid dependency on Russia. This will include the delivery of liquefied petroleum gas from the USA to a new port facility in Lithuania. Let’s all hope that the facility is well designed and safely operated. Don’t buy a vacation home in that neighborhood. New gas supplies will not be prepared quickly. It will take several years to make a sizeable impact in the European gas supply, but there is now more cooperation than ever before in the energy planning of Western states. It’s about time.

So here is my best guess for the near future in Ukraine. Putin is not going to relinquish Crimea—not this month, or any month. Russia will likely not launch an all-out invasion of Eastern Ukraine. Putin has taken the measure of his geopolitical dance partners in the West. He does not want full-scale cooperation against Russia by the US, Canada, and Europe. Russia could all but eliminate the strife in Eastern Ukraine by withdrawing its military and financial support for pro-Russian Ukrainians and by ending its clandestine operations in Ukraine. However, in all likelihood, Russia will continue to direct a smoldering conflict in Eastern Ukraine while pretending to be “seeking peace.” The uncertainty and chaos in Ukraine suits his purposes. From Putin’s point of view, it keeps the West “on the edge” without causing a more harsh Western response.

In my view, the best way for the West to help the Ukraine is to avoid vague threats and present a united front with well-enforced economic sanctions against Russia. That bear dances well, but all bears must eat, and the Russian bear has a big appetite that feeds on cash from US and Western banks. Reasonable sanctions won’t wrestle the Crimea from Russia, but they can prevent Russia from invading and seizing a third of the remaining Ukraine without firing a shot.