FIRELANDS Dystopian Thriller — On Sale at Kindle for $0.99 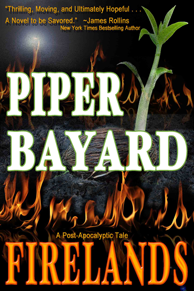 “Piper Bayard’s FIRELANDS is a harrowing and cautionary tale of a world in strife, of men and women struggling to survive amidst the fiery apocalyptic ruins of modern society.  Thrilling, moving, and ultimately hopeful, here is a novel to be savored long after you turn the last page.”

“With great characters and an amazing world that both mystifies and terrifies, FIRELANDS deserves to be mentioned with the other great dystopian novels of the past three years.”

“With echoes of Under the Banner of Heaven and The Hunger Games,  FIRELANDS is a sprawling adventure ranging across a world racked by post-apocalyptic want, denial, and prophetic dictum. Equal parts heroic quest and morality play, it races forward on a current of deftly woven characters and breakneck action, never failing to deliver what every reader wants–a helluva good story.”

“FIRELANDS envisions a terrifying and prescient future of a United States lost to the worst extremes.  Piper Bayard’s wonderfully relevant and beautifully realized fantasy tale would make George R.R. Martin proud as it combines the best of Children of Men with Stephen King’s seminal The Stand . . . the result is a major debut that is not to be missed.”

—Jon Land, bestselling author of Strong at the Break and Betrayal