Is America Headed Toward Firearms Confiscation? Ask a Law Professor 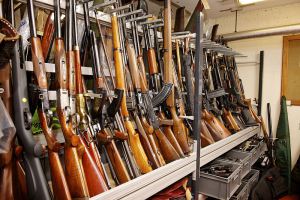 A great deal of misinformation regularly fires throughout the Cyberverse about gun control. Tempers flaring, insults flying, and people “unfriending” those who state even the barest, most uncontested facts from any source on any side of the issue. In an effort to wrest this topic kicking and screaming from the fear mongerers on both sides, I spoke with University of Colorado Constitutional Law Professor Richard B. Collins to get the straight skinny.

Many people in the US are comparing the latest New York gun control laws to the laws of the UK, Canada, and Australia, where guns and gun ownership are highly restricted and regulated. They are concerned that the registration requirement will be enacted at a federal level, and that it will lead to confiscation. What, if anything, would prevent registration leading to confiscation from happening in America?

When it comes to confiscation, the confiscation question is, “Confiscate what?” If police find a nuclear device in your basement they can already take it, and we hope they will. The extreme image is that the government will confiscate handguns and rifles. I’m pretty sure that couldn’t be done. Even in Australia they couldn’t get the wherewithal to confiscate [rifles and most handguns 9mm in caliber or less], and, as I said, Australia has no right to bear arms in its Constitution. I am reasonably sure that if any US legislature had the political guts to try to confiscate guns, the Second Amendment and political climate would prevent that from happening.

A point of American law that gets ignored is that we already have legal limits on what guns we can possess. All kinds of legal limits. One example is the National Firearms Act of 1934, which banned the private use of machine guns.

Every country has a definition of a weapon so powerful that only the government can possess it. We have a line in America. In most other countries, the line is much lower than it is here; however, even the most stringent of countries do allow hunting rifles and [some] handguns.

In your opinion, do you believe the newly enacted New York gun laws will pass muster with the Supreme Court?

More likely than not, they will. But I’m not at all sure. The seminal case is District of Columbia v. Heller. It is a case from D.C. with an opinion by Justice Scalia that is very pro-regulation. It does not stop people from having a gun at home to protect their houses, but once they walk out their doors, they can be regulated. New York law is very complex. In general, comparing the new gun laws in New York to the Heller case, I would say they will probably survive 2-1.

One possible issue, however, is if a federal employee falls under the requirement to report information about a patient who owns guns. According to the Patient Protection and Affordable Care Act (“Obamacare”), no wellness or health promotion activity under that Act is allowed to require the disclosure or collection of any information relating to the ownership or possession of firearms or ammunition. However, nothing in Obamacare prevents a state or private health care worker from doing so.

Richad B. Collins is a Professor of Law at the University of Colorado and the Director of the Byron R. White Center for the Study of American Constitutional Law. The short version of his resume contains six pages of accomplishments, each more impressive than the last. Notably, he worked with the Native American Rights Fund, argued numerous Supreme Court cases, published countless articles in law journals and reviews, organized several symposiums, was awarded a Fulbright grant and the the Smith Kline Beckman Award in Legal Education, and was a Visiting Professor at Wuhan University and Beijing University in China.

My profound thanks to Professor Collins for giving us the Second Amendment facts in this time of high passions around the right to keep and bear arms.

In a future article, we will discuss Professor Collins’ perspective on executive orders.

Piper Bayard is an author and a recovering attorney with a college degree or two. She’s also a belly dancer from way back and a former hospice volunteer. She is currently the managing editor of Social In Worldwide, Inc., and she pens post-apocalyptic science fiction and spy thrillers. Her dystopian thriller FIRELANDS is available at Amazon in paperback and on Kindle, at Barnes and Noble on Nook, and at Kobo.

Her spy thriller writing partner, Jay Holmes, is a veteran field intelligence operative with experience spanning from the Cold War to the present Global War on Terror. He is still an anonymous senior member of the intelligence community and unwilling to admit to much more than that. Piper is the public face of their partnership.

©2013 Piper Bayard. All content on this page is protected by copyright. If you would like to use any part of this, please contact us at the above links to request permission.