Benghazi — The Real Issue Behind the Missing Emails 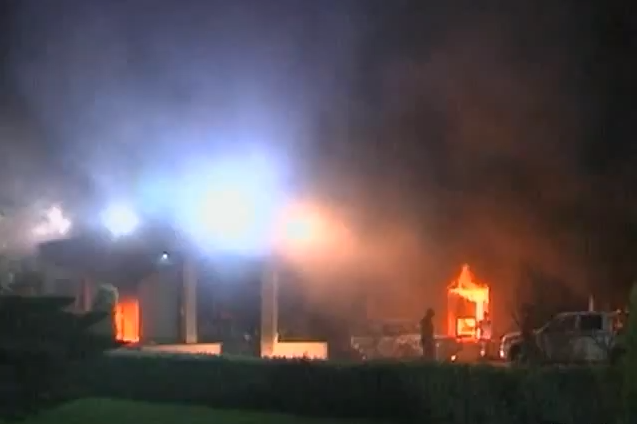 Benghazi. The watershed event that former Secretary of State and Democratic presidential candidate Hillary Clinton can’t make go away, no matter how many emails she deletes.

Much has been bantered about regarding Clinton’s unsecured servers that she kept in her home, transmitting both classified State Department and personal emails. Was she really that ignorant? Or was she deliberately devious? The same questions were asked regarding her denial of security for Ambassador Stevens at the Benghazi Consulate.

Many would frame this discussion as purely a cybersecurity issue. However, the heart of the investigation is the incident on  9/11/2012 at the Benghazi Consulate, when US Ambassador Christopher Stevens, Information Officer Sean Smith, and CIA Operatives and former Navy SEALs Glen Doherty and Tyrone Woods were murdered by the Al-Qaeda affiliate Ansar Al-Sharia.

It is worth remembering what we do know about that seven-hour attack, in which our military was ordered to stand down while our people were being slaughtered. Below is a post that was written by Jay Holmes, a senior member of the US intelligence community, six weeks after the brutal attack on our unsecured Consulate.

On September 11, 2012, Islamic terrorists attacked the US Consulate in Benghazi.

They murdered US Ambassador to Libya Christopher Stevens and three other Americans during the attack. We extend our condolences to the loved ones of those four Americans who lost their lives in service to their country.

The administration is still repeating the mantra that “the attack was unprecedented.”

Apparently, these youngsters remain unaware of the November 1979 attack on the US Embassy in Tehran. Note to Self:  Send son’s middle school textbook and DVD of Argo to White House.

Within days of the attack, the public learned that Ambassador Stevens had endorsed the Benghazi Consulate’s requests for increased security and passed them on to Washington. We know that request made it as far as Secretary of State Hilary Clinton.

I’m not yet certain if the request made it to President Obama’s desk. However, the White House, with the cooperation of the major media outlets, played down the allegations that security was denied from the top and claimed that the lack of security was caused instead by “Republican budget cuts” of State Department security funds. The White House also claimed that “all the intelligence” indicated there was no need for increased security.

I found both of these statements worrisome, because as political hot air goes, they seem fairly flimsy and desperate. After decades of listening to the statements issued forth from our various administrations, I know that often times that sort of flimsiness in White House denials indicates a concern for brewing scandals.

Most Americans are aware that all federal budgets and omnibus spending bills require the final approval of the US President, so the budget excuse was at best nonsensical, and at worst an indication of deeper troubles. As for “all the intelligence” which indicated no need for increased security, the White House and the Secretary of State were both aware of two failed bombing attempts against the Benghazi Consulate that occurred April 6 and June 2, only a few months before the successful September 11 attack.

Panetta’s claim that the administration lacked “enough information” is inconsistent with the fact that they knew about two prior bombing attacks on the Benghazi Consulate, and it is a direct contradiction of the fact that they received real time imagery from the drone on site.

It is also a direct contradiction of the fact that eight US security personnel were sent by charter plane from Tripoli to rescue the Benghazi staff during the incident. How is it that the administration had enough information to send the team from Tripoli, but not enough information to employ any of the vast military assets that were available and may have saved some of the American lives lost in the attack and the ensuing rescue operation?

CIA sources also said CIA employee Tyrone Woods used a laser to illuminate a terrorist mortar team that was firing on the Consulate.

As an ex-Navy SEAL, Woods would not have exposed his laser by illuminating a target unless he expected an air unit such as an armed drone, Navy F/A-18, or an Air Force Spectre gun ship to fire on the target right away. Permission for that fire would have come from Commander of Forces in Africa US Army General Carter Ham or any of his superiors, such as Defense Secretary Panetta or President Obama. Revocation of that permission, which Woods apparently had reason to believe was issued, could only have come from those same people, as well.

This answer is convenient for him and the Obama administration, and it is being well received by the Democratic Party faithful. But those voters who feel less constrained in their political choices might not find Panetta’s response an adequate substitution for an explanation or accountability, and the fact is that no presidential candidate can be elected solely by the votes of their party’s faithful. For either Romney or Obama to win the election, they will need the votes of those Americans who are willing to vote without regard for the labels “Democrat,” “Republican,” “liberal,” “progressive,” or “conservative.”

Based on the information thus far available, it appears the administration decided to respond to the attack on the US Consulate in Benghazi with as minimal a response as possible.

I suspect this has everything to do with the fact that Obama was reluctant to initiate military activity on a new front so close to the election when so much of his base is anti-war under all circumstances. His minimalist approach turned out to be a bad guess, and it is now becoming clear to the public that said guess was made against the advice of his people on the ground.

With time and a little interest from members of Congress, more facts will surface and a clearer picture will emerge.

How much time that will take is a key question. On November 6, the administration might realize the benefits of its strategy of dodging questions concerning the Benghazi debacle, but the questions are significant enough to lose Obama some votes. In fact, the President might find himself back in the community organizing business next January.

What happened in Benghazi matters.

Shortly after this article was published, we learned from Retired Admiral James A. Lyons, former Chief of the US Pacific Fleet, that Ambassador Stevens was in Benghazi to meet with a Turkish emissary to arrange the transfer of Gadhafi’s captured armaments to an Al-Qaeda group in Syria. (See Admiral Lyons’s letter to The Washington Times, Obama Needs to Come Clean on What Happened in Benghazi.) It is also public that the story put forth by the White House blaming the violence on an obscure video that ridiculed Islam was published in Cairo before Glen Doherty and Tyrone Woods had even been killed.

While Ms. Clinton certainly has a great deal of explaining to do about passing classified information on her personal, unsecured server, it would be a great disservice to the US if we forget the original questions about her ignorance and intentions that uncovered the cybersecurity breach in the first place. We cannot afford to forget Benghazi.