We wanted to get some eclectic input on the holiday season and what we might expect in 2016, so we consulted with our Bayard & Holmes intelligence, terrorism, and asymmetric warfare expert, retired terrorist Mohammed Faqwahdi Al-Lansingi, a.k.a. Mo. We found Mo’s mobile command center and falafel truck near the ice skating rink at Rockefeller Center. 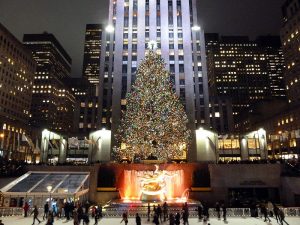 Hello, Jay and Piper. Business has been great! I’m pulling in more customers than Madam Flemstein’s whorehouse in Haifa. I can’t believe how much people tip at Christmas time. I wish we could have Christmas every month.

Sounds like you’re getting used to Christmas in America.

Well, it has taken a while. This Christmas thing, it’s so confusing. I want to be American, so I bought a Christmas tree. Then some Jews tell me you should only have a tree if you’re Christian, and the Christians tell me the tree has nothing to do with Christianity. I remember back in the old days, we only had six trees in all of Gaza.  So I’m always happy for any reason to have a tree, and I don’t care what religion it is.

Have you gotten used to Santa Claus coming around once a year?

It took a while. When I first heard some damn foreigner from the North Pole was going to break into my house, I thought he was a Mossad agent. Instead of leaving out cookies, I boobie trapped my doors with Semtex. Then I started seeing Santas everywhere. After a while I realized that Santa does not work for Mossad at all. I’m beginning to suspect that he works for a ruthless and cunning terrorist organization named WalMart.

Did you give your friends presents this year?

Oh, yes. I gave them all perimeter lights.

Yes! Most of my neighbors use them, and they can get very fancy – red, green, blue, and some even look like icicles. I have them in three colors, myself. The HOA sends me a letter every year telling me to take them down. I don’t understand why. These Americans are so clueless with their security. Only my terrorist friends and rednecks and hippies understand that perimeter lights are for the whole year. 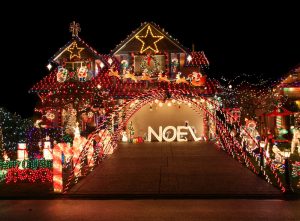 Actual photo of Mo’s perimeter lights,
taken on the 4th of July.

What did Santa bring you?

Santa? Santa doesn’t bring me anything. He just keeps trying to get me to sit on his lap when I go to the mall. I stay away from that guy.

But my neighbors – they gave me presents. The nice lady across the street gave me a fruitcake. In fact, I got seventeen fruitcakes this year. Like every other year, I glued them to the south side of my house. A few more Christmases like this, and my bulletproofing will be complete.

Do you have any plans for New Year’s Eve?

No. I stay home. Evading all the drunks on the road on New Year’s Eve here is more dangerous than trying to sneak over the fence into Israel from Gaza.

We stay home for the same reason. Do you have any New Year’s resolutions?

My New Year’s resolution is the same this year that it was last year and every year since I came to America. I’m resolving to not go back to the Middle East. I love America. Everyone has indoor plumbing, the government doesn’t throw people off of buildings, and the only people at risk of being stoned are the ones who smoke pot.

As our terrorist expert, do you have any predictions for 2016?

Do you have any predictions about the upcoming presidential election?

Yes. I predict that all of your media outlets will make countless billions on this election, just like they did on the last one. I also predict that whomever is elected will be blamed for violence in the Middle East, starvation in Africa, and all of the failed states in Latin America. Those are the two results we can always predict for any American election.

Thank you for your time, Mo. We’ll let you get back to your customers. Enjoy that big Rockefeller Center tree. 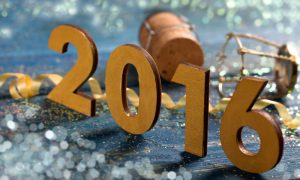