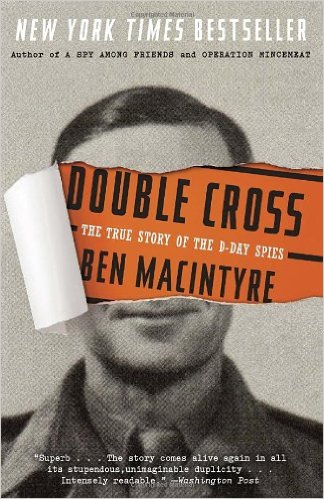 DOUBLE CROSS, by writer-at-large and associate editor of the Times of London Ben MacIntyre, addresses one of the more complex and important intelligence operations of World War Two. It explains how the UK’s MI-5 Counter Intelligence division quite effectively turned and managed German spies in an attempt to deceive Germany about the Allied plans for the invasion of Western Europe in 1944.

In DOUBLE CROSS, McIntyre manages to present personalities from both sides of that terrible war in very human form.

He demonstrates how imperfect people from diverse backgrounds working for MI-5 shared that one essential quality that any effective intelligence person must have. They shared a genuine commitment to their mission. In this case, their mission was to help defeat Nazi Germany. By most traditional standards, the agents would not appear to be “cut from the right cloth.” In some instances their handlers committed blunders in dealing with them. The book clearly shows the reasons why each of them might have failed miserably, as well as why they didn’t.

The first thing about this book that jumps out is its readability.

Great Britain’s operation for running double agents involved many people and many details. The details can be tedious to consider, but without considering enough of them, these operations can’t be reasonably understood. MacIntyre has done a brilliant job of presenting enough details without making the book read like a boring bureaucratic report. I envy his ability to present such a complex and important piece of history in such a readable form.

Good history writers do good research—lots of it—and Ben MacIntyre certainly did his. But he did something else as well. He very skillfully analyzed the collected data and produced an accurate and clear interpretation of the facts. I’ve never met Ben MacIntyre, but if he was never a spook, he should have been one. For us.

I had previously read and enjoyed a couple of MacIntyre’s books, but so far, this must be his masterpiece.

I have no hesitation in giving this book a Five Star rating on the Five Star scale. It’s not a movie but I can’t help but assign our Bayard and Holmes “.44-Magnum” rating because I so rarely get to use that top assessment. Anyone with interest in World War Two or the world of intelligence operations, or who simply likes good action stories, should absolutely read this book. It’s purely a great book.

Bravo to Ben MacIntyre for staying awake and on course through so many hours of work reading thousands of pages of documents to get to the critical facts. Well done!

You can find DOUBLE CROSS, along with MacIntyre’s other books, at Ben MacIntyre: Books, Biography, Blog, Audiobooks, Kindle.

Piper Bayard is an author and a recovering attorney. Her writing partner, Jay Holmes, is an anonymous senior member of the intelligence community and a field veteran from the Cold War through the current Global War on Terror.

Together, they are the bestselling authors of the international spy thriller, THE SPY BRIDE, now available on kindle and in paperback at Amazon and on nook and paperback at Barnes & Noble.

©2016 Bayard & Holmes. All content on this page is protected by copyright. If you would like to use any part of this, please contact us at the above links to request permission.