Communist China — The Pirate of the South China Sea 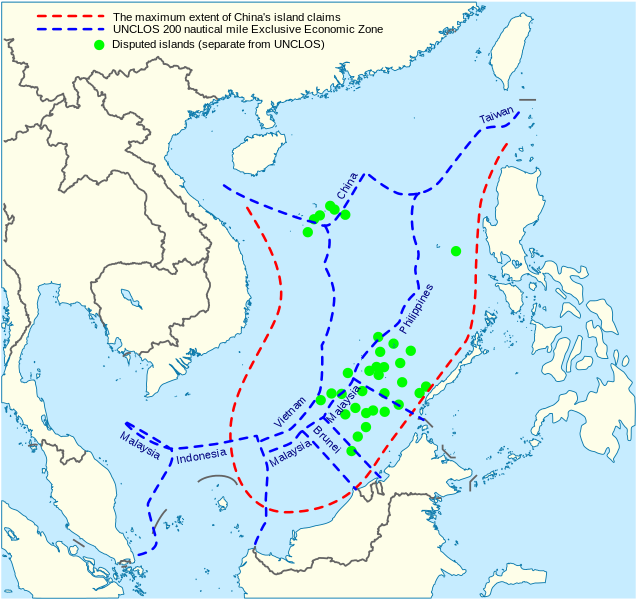 On July 12, 2016, a landmark event occurred for the South China Sea — the Permanent Court of Arbitration ruled against the People’s Republic of China in a case filed by the Philippines under the United Nations Convention on the Law of the Sea, rejecting China’s claims to western Philippine islands. 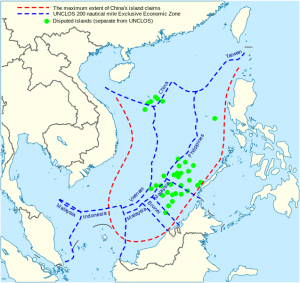 In 2013, the Philippines filed the case as a direct challenge to Communist China’s expansive territorial claims that stretch to within a hundred miles of the Philippines west coast.

The court’s ruling makes it clear that the international community has rejected China’s imperialist aggression in the South China Sea. There are no enforcement provisions in the UN convention, so the court ruling against China does nothing to directly prevent it from continuing to expand its presence in the South China Sea. Nonetheless, the ruling is a major diplomatic and public relations disaster for China’s imperialist agenda.

The ruling matters to several countries for several different reasons.

It completely validates the positions of Communist China’s opponents in the dispute. Since the ruling, Indonesia, Malaysia, and to a lesser extent Borneo have experienced an increase in public interest in opposing the China’s aggression.

In the Philippines, the public celebrated the ruling while protesting against China.

Interestingly, the current administration in the Philippines has, with less fanfare, increased its efforts to negotiate economic sharing of the South China Sea. China is happy to play along with negotiations, but their word will be about as good as it usually is, which is not at all.

In Vietnam, the response has been less public.

Vietnam continues to oppose the People’s Republic of China in the South China Sea dispute, but it has been careful this week to not allow public anger against China to manifest in the form of protests at Chinese diplomatic facilities in Vietnam. For the moment, Hanoi is taking a quiet but determined approach in dealing with China and is happy for the conflict to be framed as a Philippine-China problem on public relations terms. Vietnam’s caution is understandable. The closest points of land between the Philippines and Communist China are over 500 miles away from each other. The distance from China to Vietnam is only an inch.

The government of France made what might appear to be a surprising, or perhaps comical, move by announcing that it will support free navigation in the South China Sea by conducting freedom of passage exercises.

France has stated that it remains devoted to international law and order . . . Right. Maybe so. But for the moment, I’ll view France’s “freedom of navigation plans” in the South China Sea with a bit of historical context.

For reasons of free trade, France, along with nearly everyone on the globe, has a legitimate interest in the free navigation of the South China Sea. Additionally, France understandably wants to maintain maritime communications through the South China Sea between its colonial outposts in the Pacific and Indian Oceans. However, as far as France’s noble and rather sudden religious devotion to global peace law and order, I remain skeptical. This is the same nation that wanted to deliver two Mistral class carriers to Russia after Putin’s invasion of Ukraine.

Currently, the French government is continuing to do all that it can to support the French defense industry through the export of warships, fighter planes, air transports, armor, artillery etc. If it could convince anyone that croissants or French lingerie were useful defense products, they’d be busy boxing some up at this very moment. Come to think of it, French lingerie would be a major improvement at all those damned boring European defense industry expos. I’ll take a French lingerie model over a skanky Airbus 400 any day.

French freedom of navigation exercises won’t do much to dissuade Beijing’s imperialist agenda, but they might drum up some nice weapons sales for French corporations.

I’m not at all opposed to France competing in the world arms market. For one thing, people that are forced to share a planet with the likes of Communist China, North Korea, Russia, and the various Jihadistans have a right to defend themselves. Some of the less fortunate countries don’t have a Lockheed Martin, an Airbus, or a Finmeccanica on which to lavish trillions of dollars or euros. These less fortunate nations must lavish their paltry billions on foreign suppliers.

When the capitalist warmongering US or the holier-than-thou peace loving European nations manage to sell their defense products on the international market, it enables their defense industries to maintain higher quality and innovation in the weapons that their own militaries use.

France is, after all, an ally of the US and an important member of NATO. So that’s fine if the French can drum up another big defense contract. I just don’t want to gloss over France’s arms sales campaigns with anything like “…devoted to international law and order,” or any other pseudo socialist pabulum.

In China, the response has been predictable and highly managed as ever.

The People’s Republic of China has allowed an egg throwing festival-type protest against the demon aggressor Obama. The government provided members of its public with large quantities of eggs and posters of Obama to use as targets. If China didn’t have nuclear weapons, they’d be so damned funny.

In Beijing, no protests were allowed at the US or Philippine embassies. Also, China has minimized the rage factor against Obama and the Philippines on the internet. The interesting thing is that China is choosing not to overextend its credibility with the Chinese public by overplaying the old “rage against the capitalists” routine.

That restraint tells us something important — Communist China is not as confident as it likes to pretend to be about its ambitions in the South China Sea.

While swearing that it will never back down an inch, it in fact is hoping to negotiate a face saving way out of its South China Sea public relations disaster. Otherwise, it would be encouraging a much more toxic rage in the Chinese public.

So what does all this mean to US taxpayers?

The US administration won’t gloat about the ruling against China. Along with everyone else, the US expected this result, but the US will continue to encourage Communist China’s neighbors to better develop their own defenses to deal with that country’s imperialist agenda.

The US will continue freedom of navigation operations in the South China Sea, but at the same time, this administration and congress won’t take the obvious steps for opposing China’s imperial agenda by withdrawing its “most favored nation” status.

Corporate America and American consumers will continue to support Communist China’s economy by purchasing low quality overpriced junk from it. The trade balance between the US and China will remain hideously unfavorable to US taxpayers and the US economy, but don’t expect this congress or this administration to do anything about it. They won’t.

The important silver lining to all this is that although the People’s Republic of China will never admit it to the Chinese people, it clearly does not intend a major military escalation in the Pacific.

Its usual temper tantrums are not working, and in China, as on Wall Street, money talks. The shrill Communist Chinese rhetoric will continue, but expect some quiet back alley diplomacy from the Chinese in the next few years.

The People’s Republic of China will demand everything, but it will take what it can get.