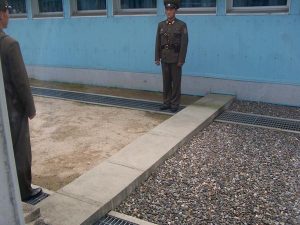 Kimi 3.0 has accompanied missile tests with frequent threats to “annihilate” the South Korean military, the United States, Japan, and anyone else that might annoy him. His childish histrionics, combined with the fact that North Korea has at least a few nuclear warheads and a significant store of anthrax and VX nerve gas, has caused reasonable adults to ask some questions:

As for the question of what functioning missiles Kimi 3.0 might have, North Korea’s recent missile launches have been disastrous.

Each of its last two attempted missile launches—the most recent on April 28, 2017—ended with the missile exploding shortly after ignition. Still, the North Koreans have proven that by making weapons development an absolute priority, they are able to progress towards a credible nuclear ICBM threat.

Many analysts will disagree with me on this point.

For argument’s sake, let’s consider North Korea’s most advanced missile currently in its operational inventory, the Taepodong 1 missile. The TD1 has an operational range of 3,000 miles. It cannot reach Hawaii or Seattle, but it could easily reach Tokyo, Japan.

To be clear, by “operational” I mean that the TD1 can be successfully launched with at least a 50% chance that it will depart North Korea and arrive and detonate within 50 miles of the intended target. Such a standard would be ridiculously low for the United States or Russia, but the North Koreans are not as particular about which people they kill, as long as they can still kill lots of people in a targeted nation.

For example, let’s say North Korea launched ten TD1 missiles armed with VX gas toward Tokyo. If half of them departed North Korea successfully, and if four of the remaining five were shot down by Japan and/or the US Navy, that would still leave one missile unaccounted for. If that one were to detonate 50 miles short of or beyond Tokyo, it could still cause thousands of casualties. For Kimi 3.0, this standard is a win.

While North Korea does not yet have a missile in its operational inventory with sufficient range to reach Hawaii or the continental United States, it is trying to develop one, and it has made progress toward that goal in the past two decades.

The frequent waves of famine that North Korea has suffered as a result of Kimi 3.0’s gross mismanagement of the North Korean economy have never dissuaded Kimi 3.0 from pursuing expensive weapons programs. When offered massive economic aid and the opportunity to have international sanctions lifted in exchange for discontinuing his missile development and his nuclear weapons production, Kimi 3.0 has consistently chosen starvation and suffering for his people in lieu of curtailing his weapons programs.

This leads us to our next question of whether Kimi 3.0 would use weapons of mass destruction against South Korea and the over 20,000 US forces in that country.

This question is the trickier one to answer. In the current situation, as of today, he won’t. We know because today he didn’t. With each day that North Korea increases its missile and nuclear capabilities, the calculus becomes more difficult.

When making estimates of what a nation might or might not do, we have to consider the motives of the elites in that nation.

In the case of North Korea, the “elites” are Kimi 3.0 and nobody else. His prime motive is the same one that he inherited from his grandfather and his father—he wishes to stay alive and rule North Korea.

I can think of no scenario in which North Korea would attack South Korea, Japan, or the United States with nuclear or nerve gas-equipped missiles and remain in power for very long.

The retaliation would be massive and effective. Even without the use of any WMDs, Japan, South Korea, and the United States could obliterate North Korea if sufficiently provoked.  The nasty wild card in East Asian WMD Poker is the fact that Kimi 3.0 is indifferent to the suffering of the North Korean people, and that makes him less concerned about potential North Korean casualties. Even considering that wild card, in my estimation Kimi 3.0 will not risk using WMDs against the United States or its allies in the near future, such as the next five years.

So where does that leave us?

That leaves us having to ponder how far we are willing to allow North Korea to go toward developing a credible nuclear threat and what we are willing to do to stop it. So far, we have been unwilling to conduct preemptive strikes against North Korea because of the potential consequences. One plausible consequence would be massive artillery barrages against northern South Korea. I disagree with estimates that Seoul could be “wiped out” by North Korean artillery attacks, but thousands of casualties could be inflicted. In any case, the price of conducting preemptive attacks against North Korea has increased over the last ten years, and it will continue to increase with each passing year.

Our strategy of multilateral talks and sanctions against North Korea is a warm, comforting pipe dream. It has not worked since 1985, and it won’t work tomorrow.

As for our dear trusted friends in South Korea, they responded to President Trump’s suggestion that they pay for the cost of the US Terminal High Altitude Area Defense missile system being installed in South Korea with a simple and very public “No.”

In my opinion, the United States should make whatever decisions it wishes to make concerning North Korea on the basis of US interests. Because of the wider world view, our allies cannot be completely ignored, but we need to be clear with our Asian allies about how far we will go concerning North Korea, in what circumstances we will go there, and what we expect from our allies in return.

If you own a vacation home in Hawaii, don’t panic and sell it yet. But keep in mind that the cost of intervening against the undisciplined man man of North Korea will increase with each passing year.