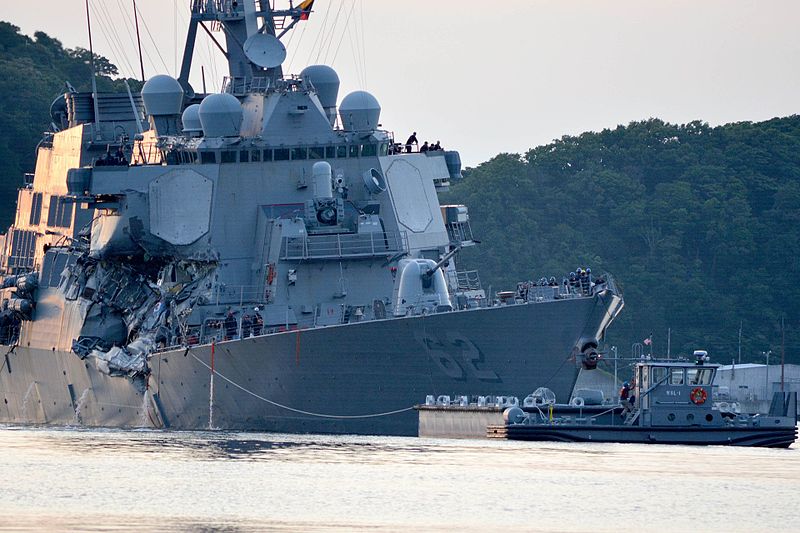 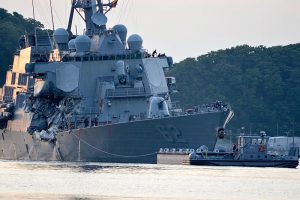 USS Fitzgerald at Yokosuka Naval Base
Image by US Navy employee, public domain

The 29,000-ton container ship suffered minor damage and was not impeded from continuing its journey to Tokyo. The 9,000-ton Arleigh Burke class USS Fitzgerald, on the other hand, suffered significant damage on her starboard side. Based on early reports, the USS Fitzgerald was in danger of sinking, and seven of her crew members lost their lives.

First and foremost, we extend our sincere condolences to the families and loved ones of the seven sailors who lost their lives.

This collision reminds us that there is no such thing as a “safe” deployment. Because of what those seven sailors suffered and what their families are now paying, decency demands that we be cautious in drawing conclusions about the causes of the collision.

Our US Navy, along with the broader US defense community, exists to ensure the sovereignty of the United States of America and the freedom and safety of her citizens.

Modern, extravagantly expensive and highly complicated Burke class destroyers play a critical role in that mission. These ships are an important and finite asset, and we currently have sixty-one of them in active service with fourteen more in various stages of design and building.

From my perspective, the loss of any service member always matters. Now, and at a time when only a small minority of eligible young Americans are willing to serve in our military, it is even more important for our military to do what it can to minimize personnel casualties.

In modern corporate America, workers are generally disposable and easily replaceable, but in the modern US military, qualified soldiers and sailors are a precious resource. The US military is in the business of war, and human losses are a grim, but somewhat unavoidable, result of war and war preparations. However, we must endeavor to not waste the lives of our service members due to inadequate equipment, doctrine, training, or leadership.

In an attempt to avoid similar calamities in the future, the US Navy and the US Coast Guard will each conduct thorough independent investigations of the collision.

The Navy will, in fact, conduct two parallel investigations. The Japanese Coast Guard is also conducting an investigation, and the Philippine government has, not surprisingly, announced that it, too, will conduct its own investigation. In addition, beyond all the official investigations, any number of intelligence services from a variety of nations will be searching for any unusual evidence relative to the collision.

All investigations of maritime calamities rely on constructing an accurate and detailed timeline of the events leading up to and subsequent to the impact. The communications logs, navigations logs, bridge recordings, and all physical evidence from the USS Fitzgerald and the ACX Crystal must be examined in detail. Also, all members of both crews must be questioned. The investigators have not had time to gather and examine all of the statements and evidence, and they have yet to offer any conclusions concerning the causes of the accident.

Many Americans care a great deal about our Navy, our entire military, and our nation’s defense. That perhaps explains their need to have immediate answers as to whom or what caused the disaster. I salute their patriotism. For a democracy to survive, it requires the diligence of enough of its citizens to overcome apathy. However, I suggest to them that they remain flexible in their views until more evidence is available.

Some of the opinions being passionately expressed are, to say the least, a bit colorful. Most collisions at sea do not involve complex conspiracies or exotic causes, and a collision in a shipping route at night in busy waters is not altogether rare. This collision has our attention because it involved one of our valuable “Burkes,” and because seven sailors lost their lives.

Many of the conspiracy theories popping up are influenced by several key factors.

First, the night was clear. Even on a clear night at sea, haze can impair and distort a helmsman’s or watch stander’s view, and judging the distance and speed of another ship at night is not as simple as it sounds. Even so, in this day and age, we all quite reasonably expect that any modern US Navy warship has adequate radar, sonar, transponder sensors, and adequate information processing systems to detect and note an approaching 29,000-ton freighter. It begs the question, how did the Fitzgerald and ACX Crystal not see each other in time to avoid a collision? In theory, only one of the ships’ crews would need to be aware of the other ship in time to avoid a disaster.

The second reason the public is suspicious is that the accident occurred near Japan, where China and/or North Korea might be able to easily influence events. I, too, am suspicious. In fact, I am justifiably suspicious of the North Koreans and the Chicoms every moment of every day. However, we must remember that suspicion is not, in itself, evidence.

Third, some early and not yet verified statements indicate that the ACX Crystal had her running lights and her navigation transponder off. At this point, my suspicion is that her transponder was on, but I may be wrong. I am not sure about her lights. If they were in fact off, then that may well have been a major contributing factor to the collision. We will have to wait for all the crewmen to be questioned and data logs from multiple sources to be examined before we know if those assertions are accurate.

A fourth factor that drives suspicions of foul play is the fact that as a container ship, sophisticated electronics warfare equipment capable of damaging or temporarily obstructing radar and radio systems could conceivably have been loaded on to the ACX Crystal without the knowledge of the captain or crew. Such equipment could have been activated remotely.

It’s important that for now we remember the critical difference between “could have been” and “was.”

At this point, I estimate that Communist China wants war with the United States even less than we want war with China. In spite of all the propaganda out of China, and in spite of her current efforts to expand her naval power, China remains at a strategic disadvantage in any potential war with the United States. North Korea has been, and remains, less rational in its decision making as compared to China, but the distances between “would do it” and “could do it” remain substantial for now.

One possible factor that many members of the public might not be aware of is the fact a US Navy warship might at times operate without its full suite of Aegis systems active.

Aegis is a powerful and brilliant radar tracking system, but the more powerful a radar system is, the more easily it can be detected by opponents. I have no information indicating that the USS Fitzgerald was on that night, or any night, operating in “quiet” mode. I am simply explaining that it is one possibility.

I understand the tremendous need for answers and explanations.

I feel the same way. I share your anger. I want to know why those sailors died, why our ship was damaged, and who or what is at fault. This sad event is important to me, because our national security is important to me, and because I consider all US military members to be my brothers and sisters. We share an oath that matters to me.

I know that this calamity is also important to many of you. We owe it to the lost sailors and to their families to find the real causes of the collision. I hope that as a country, we will not rely on emotion or conjecture, but rather wait for investigations to lead us to accurate conclusions, because as you read this, many other US Navy and allied ships and sailors are sailing in dangerous waters, and we need accurate information to prevent more loss of life and more damage to valuable ships.

Our deepest sympathies to the families and loved ones of these fine sailors.