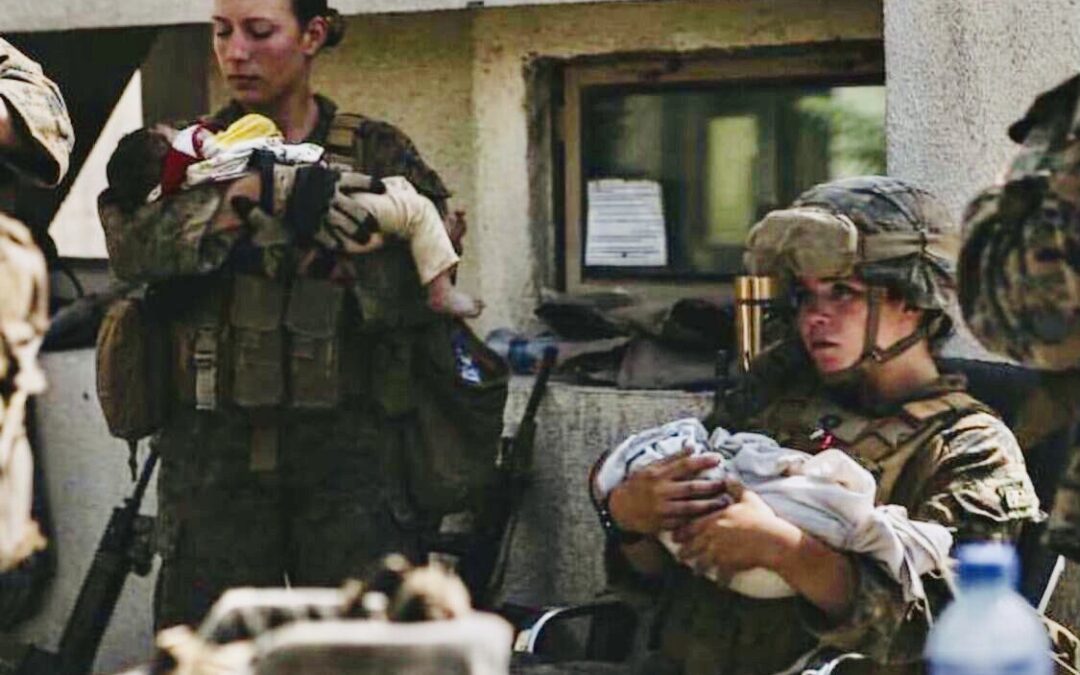 I’ve been compiling news and links on the Afghanistan Evacuation Crisis, arising after President Biden’s withdrawing of the US military ahead of securing any American, NATO, other allied citizens, or our Afghan interpreters, assets, and their families. Since the last post, Afghanistan Crisis Update, Evening August 26, the names of our 13 US military members killed in the August 26 bombing at the Kabul airport were released. There has been one drone strike in retaliation. The Northern Alliance opposition to the Taliban, led by Ahmed Shah Massoud, is staging in the Panjshir Valley. Task Force Pineapple, made up of volunteer special operations veterans, smuggled 630 people into the Kabul airport, all Afghan special forces and their families. The Taliban has intensified efforts to hunt down the people on a list provided to them by the Biden administration. Other countries have all pulled out, including the UK, and the United States is wrapping it up, telling stranded Americans desperate to get out to stay away from the Hamid Karzai International Airport in Kabul. Refugees are now flooding toward Afghanistan’s borders.

CIA base in Kabul, Eagle Base, was blown up by US forces. It was the final CIA base outside of the Hamid Karzai International Airport.

US Embassy warning Americans to STAY AWAY from Hamid Karzai International Airport due to security threats. It is safe to assume that the Americans and vetted Afghans trying to get to the airport to get out of the country are not staying in Afghanistan because they “want” to stay in Afghanistan. See one man’s journey in his attempts to flee the Taliban below.

The death count from Thursday’s bombings at the Abbey Gate of Hamid Karzai International Airport has risen to 11 US Marines, 2 US Army soldiers, 1 US Navy sailor, a reported 25-30 British/Afghan dual nationals, and over 50 other people, along with over 200 wounded.

Among those killed was USMC Sgt. Nicole Gee, seen standing in the photo above, comforting a baby on August 20. She had also gotten out 30 name-requested individuals and had shepherded people through the gates. “She was a Marine’s Marine.” . . . R.I.P.

US conducted a drone strike on an ISIS-K “planner.” . . . Something not always known is that the United States conducts drone strikes on ISIS-K and other terrorists all the time. We have for years. It’s so common it doesn’t even make the news. Articles about this particular drone strike, however, will all be full of bluster, as if we conducted the fire-bombing of Dresden in retaliation for the suicide bombings at the Kabul airport. In reality, Hellfire missiles fired from drones are usually targeting a couple of terrorists in a Toyota at the cost of ~ $100k each. Considering that if we dropped a rock in the right spot from the right distance it would accomplish the same thing, we should really come up with something cheaper. . . . Just IMHO.

Turkey’s dictator Recep Tayyip Erdogan and the Taliban are close to a deal which would involve Turkey and Qatar running the Hamid Karzai International Airport in Kabul. The hardline requirements by the Taliban are that . . . 1) NATO country Turkey would recognize the Taliban as the legitimate government of Afghanistan; 2) Turkey and Qatar would run the airport as a consortium; 3) Ankara would provide security through a private firm, whose staff will consist of former Turkish soldiers and police; 4) Additional members of the Turkish special forces, operating in plainclothes to secure Turkish technical staff, do not leave the airport perimeter.

Former Royal Marine Pen Farthing, founder of Nowzud animal shelter in Afghanistan, caught one of the final UK evacuation flights with 200 dogs and cats. Before you wonder why they were saving dogs and cats instead of people, know that the animals were in the hold, not in the seats. Nowzud staff were not able to travel with him.

CIA base in Kabul blown up by US forces: Report, Yahoo! News, Daniel Chaitin, August 28

Let’s start with some good news. US special operations veterans took things into their own hands and created TASK FORCE PINEAPPLE–an underground railroad that smuggled 630 people, all high-value Afghans and their families, into the Hamid Karzai International Airport. These Afghans were special forces soldiers who have been working closely with our military for years. The Taliban was actively hunting them down using the US biometric facial recognition database that was abandoned to them during the early days of the unplanned evacuation. See link below for entirely too many details about the operation.

Taliban has upped its efforts to hunt down and kill any Afghans who worked with us. No Afghans are allowed to leave the country at this point, and there are widespread reports of passports, green cards, and SIVs being destroyed and people holding them being beaten and savagely butchered.

The resistance to the Taliban is staging in the Panjshir Valley, revamping Soviet era weaponry to fight the Taliban, which now has all of the American armaments. To be clear, the Taliban is now one of the best-equipped armies in the world.

Republicans are calling on Biden to recognize the Afghan opposition to the Taliban, the Northern Alliance led by Ahmad Shah Massoud. . . . And the beat goes on.

Military contractors are breaking the news to their shareholders that profits are down, and they are trying to come up with ways to keep the money flowing.

US Marine Corps Lt. Col. Stuart Scheller posted a video demanding accountability from senior officers. He was relieved of his duties.

US Marines officer relieved of duties after video seeking ‘accountability’ over Afghanistan, The Guardian, August 27

One Man’s Journey for Escape from the Taliban

One man’s journey with his family, detailed in tweets by his friend, Alex Tiffin. This man worked for NATO and has been fully vetted. He is traveling with his wife and four children, desperately seeking a way out of Afghanistan before he is hunted down by the Taliban. Follow Alex at @RespectIsVital on Twitter. He is an independent reporter who has done a great job covering the Afghanistan Crisis from his home in Scotland through his connections in Afghanistan. He is disabled and this is how he makes his living, so please consider donating in appreciation of his work. 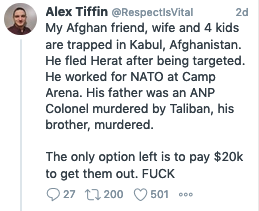 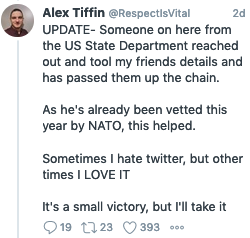 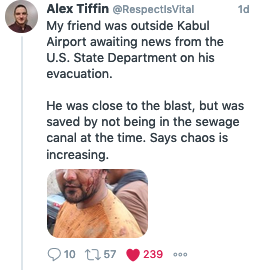 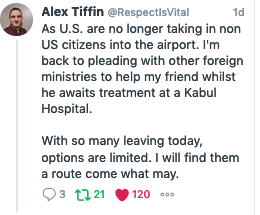 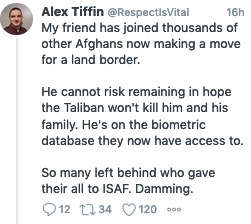 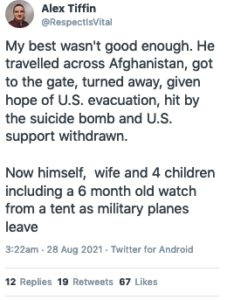