Twenty-Year Journey to the Graveyard of Empires 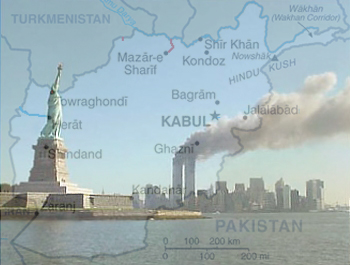 Twenty years ago on 9/11, we all watched as the towers came down. We all know where we were and what we were doing. We all remember the hush that fell over the nation, as for the first time since the Berlin Wall fell, the fact that we were all Americans mattered more than any differences we may have had. Nations around the world gathered to our side, and we vowed to hunt down and defeat those behind the attacks.

Shortly after, the United States invaded Afghanistan to wipe out the terrorist camps and to keep the Islamic fundamentalist jihadis who thrived under the Taliban rule in check. Some say that over time, we lost our way in a maze of “nation building” that amounted to no more than propping up drug lords and corrupt politicians. Some say that once Bin Laden was neutralized, we had no reason to stay in Afghanistan. Some say the whole multi-trillion dollar, twenty-year endeavor was nothing but a corporate welfare program. I do not claim to know.

What I do know is that the Biden administration, through its hubris, negligence, incompetence, eagerness for a 9/11 photo op, or some combination thereof, pulled off the single worst foreign policy disaster in the history of the United States, leaving untold Americans “who wanted to stay,” green card holders, and Afghan Special Immigration Visa (“SIV”) holders in the clutches of our savage enemy. Not only were our own people abandoned because of the mishandling of the withdrawal, but also untold numbers of citizens of our Allied nations who fought with us for the past decades, along with their Afghan employees, interpreters, and assets.

What I do know is that there are civilian and veteran organizations working tirelessly to try and rescue those left behind, only to be blocked in their efforts by the Biden administration and the Taliban. It was only Sept. 9 that the White House finally approved support to assist those civilian efforts, begging the question of why civilian organizations are having to rescue our American citizens and allies in the first place.

What I do know is that the Taliban is deeply intertwined with the Haqqani terrorist network, placing several Haqqanis high in their new government. Also, the Taliban released thousands of ISIS-K terrorists held in Afghan prisons and welcomed Al-Qaeda leaders with open arms. To top it off, four of the five Guantanamo detainees exchanged for Bowe Berghdhal during the Obama administration are now Taliban ministers for the new government — a government embraced by Russia, China, and Iran.

What I do know is that the Taliban is just as keen to recognize the power of a photo op as the Biden administration, and while Biden will no doubt be talking about America’s successful withdraw from Afghanistan as he poses at 9/11 memorials, the Taliban will be officially introducing its new interim government to the cheers of terrorists around the world.

What I do know is that members of our US military, Intelligence Community, and veteran community are struggling with their outrage over the abandoned Americans, the broken promises to our Afghan partners, and the bad faith dealing with our world allies in the course of this disastrous withdrawal, wondering if their sacrifices were in vain. . . . Wondering just what the Biden administration means when it speaks of sending economic support to Afghans under Taliban rule and partnering with the Taliban to hunt down the very terrorists that they welcome to their tables.

But what I also know is that Afghanistan now has a generation of people who have never known Taliban rule. I see the videos of protests, where those who, unarmed, face down the Taliban thugs that now carry American-made weapons. I see gatherings of women who say “No” to their Taliban conquerors. I see journalists hazarding beatings to record their courage. I see the seed of a rebellion in Afghan society that challenges the Taliban, who so far, at least in Kabul, seem to be a bit like a dog that caught the car it was chasing — a Stone Age culture contending with ubiquitous cameras, Internet connections, and foreigners on all sides, watching, judging, and recording everything they say and do. As long as the eyes of the world are still on them, the Taliban cannot cut loose and go Tienanmen Square on the protestors, as they would no doubt love to do.

Alexander the Great remarked that the people of Asia were slaves because they had not learned to pronounce the word “No.” Has twenty years been enough of a respite for the Afghan people to find their voice? Will this new generation that has tasted the modern world stand up and say “No” to the Stone Age? Only time will tell.

In the meantime, we Americans are left to come to terms with this twenty-year journey to our place in the history of the Graveyard of Empires.

LINKS TO ARTICLES IN NO PARTICULAR ORDER:

Emily Miller is an independent reporter working diligently with Project Exodus to try and rescue our abandoned American citizens and allies. She is in close touch with people on the ground who are trying to get several planeloads of American Citizens and SIV holders out of Mazar-i-Sharif.  Project Exodus: Afghanistan Retired Special Forces Rescue Mission – Update 9/9 8pm ET, Emily Posts, Emily Miller, Sept. 9, 2021

Taliban spokesperson warns US not to interfere with their culture, treatment of women, Fox News, Greg Norman, Andrew Murray, and Matt Wall, Sept. 3, 2021