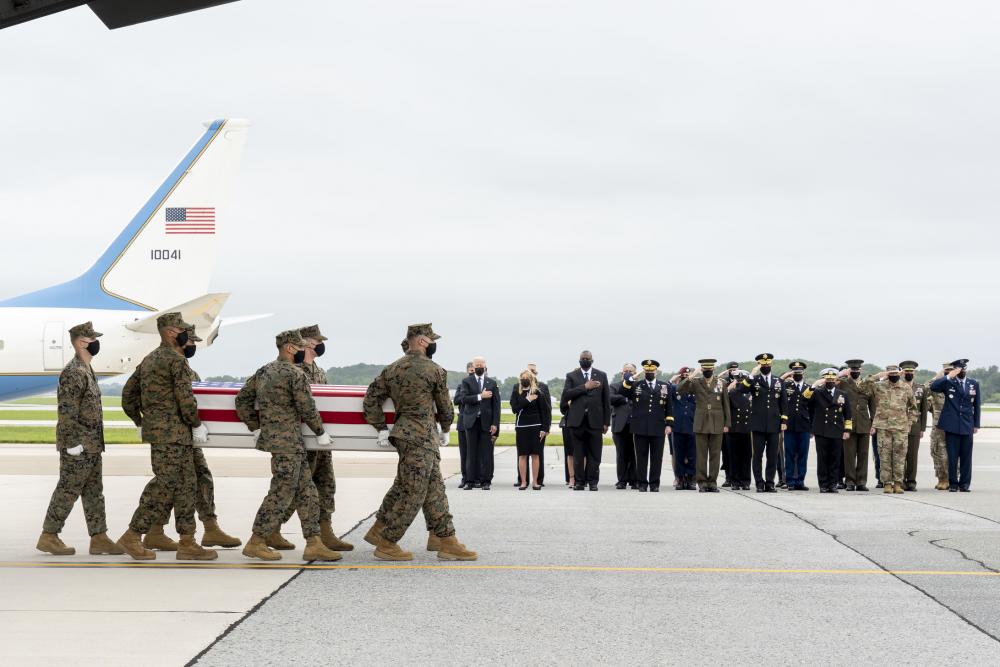 I’ve been compiling news and links on the Afghanistan Evacuation Crisis, arising after President Biden’s withdrawing of the US military ahead of securing any American, NATO, other allied citizens, or our Afghan interpreters, assets, and their families. Since the last post,Afghanistan Crisis Update Aug 27-28, the US conducted another drone strike, this time near the Hamid Karzai International Airport (HKIA). The remains of our US troops killed by an ISIS-K suicide bomber at the Abbey Gate of HKIA on August 26 were returned to Dover Air Force Base. This morning, Taliban fired rockets toward remaining American troops at HKIA. None did any damage to Americans, but at least one fell on a Kabul neighborhood near the airport. More reports of Taliban stopping Americans at checkpoints to prevent them from getting to the airport, as well as Americans and Afghan allies being turned away from HKIA. The Taliban created a special unit called Al Isha to hunt down Afghans who helped the United States and allies. As I write this, per the math, over 5,000 Americans are still stranded in Afghanistan, and the last US military planes have left Kabul.

The Taliban has created a special unit called Al Isha to hunt down Afghans who helped the United States and allies. Al Isha will be using the list the Biden administration gave them, along with the 7,000 US biometric facial recognition scanners that the US left behind, as well as the US database that contains extensive details on almost every single person who worked with the Afghan government or for the US military during the past 12 years.

Among the abandoned are approximately 600 students of the American University in Afghanistan. The Biden administration gave their names to the Taliban. While they were loaded up and waiting for clearance to evacuate, they received an email that there were no more rescue flights.

Reports are also coming in that the wives, children, siblings, and other close family members of US military members are being blocked from evacuating, even though some hold US passports.

The Taliban fired several rockets at HKIA Monday morning as the US military was wrapping things up. The rockets were fired from the back of a car. A neighborhood in Kabul took some of the fire. Reports that three rockets were intercepted before they could do damage, and a fourth made it through to HKIA, where it did no harm.

Reports that hundreds of military dogs are stranded in Afghanistan. 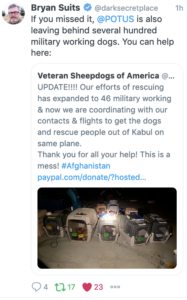 The last US military planes have left Kabul. Taliban across the city are celebrating with gunfire.

EXCLUSIVE: An American Child Plus Wives and Families of US Soldiers Are Stuck Outside Kabul Gates, Coffee or Die Magazine, Matt White, August 30 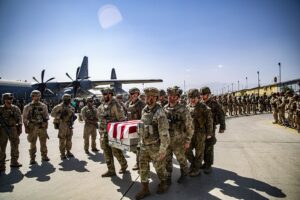 The remains of 13 US military members who were killed August 26 in suicide bombings were transferred home. President Biden and the First Lady were in attendance. Some family members of the fallen refused to meet with the president.

The United States, in a war with the Taliban and other fundamentalist Islamic terrorists for the past twenty years, is now in what is described as and “uneasy partnership” with the Taliban.

The US conducted another drone strike, this time a few blocks from HKIA. Some reports say the US was working with the Taliban in determining this target, though I frankly can’t imagine that any US targeters would work with the Taliban for any reason or believe anything they said. Some reports say that two terrorists were killed, along with one child. Some reports say that no terrorists were kill, but rather an ANDSF officer and an Afghan interpreter, along with several of their family members. Some reports say it was some combination thereof, with the strike killing the terrorists, and the explosives they were carrying killing the civilians. I have not been able to confirm any of these versions beyond the fact that a drone strike occurred, and numerous people have been killed.

The US Military began its final withdraw from HKIA, closing the gates to Americans and others desperate to get out of Afghanistan.

The UK took its final flights from HKIA.

A popular TV host in Kabul was held at gunpoint on air by the Taliban as he told his audience to not be afraid.

WATCH: Kabul TV host tells his audience ‘not to be afraid’ while held at gunpoint by Taliban, The Post-Millenial, Adam Dobrer, August 29

*While this website is Bayard & Holmes, all Afghanistan Crisis Updates are solely the work of Piper Bayard. Holmes is strictly constrained from discussing the topic of Afghanistan, and we do not discuss these articles, the situation, or anything else about the Afghanistan Evacuation Crisis. All links and information are gleaned from public sources solely by Piper Bayard.