Afghanistan–The 5400, And Where We Go From Here 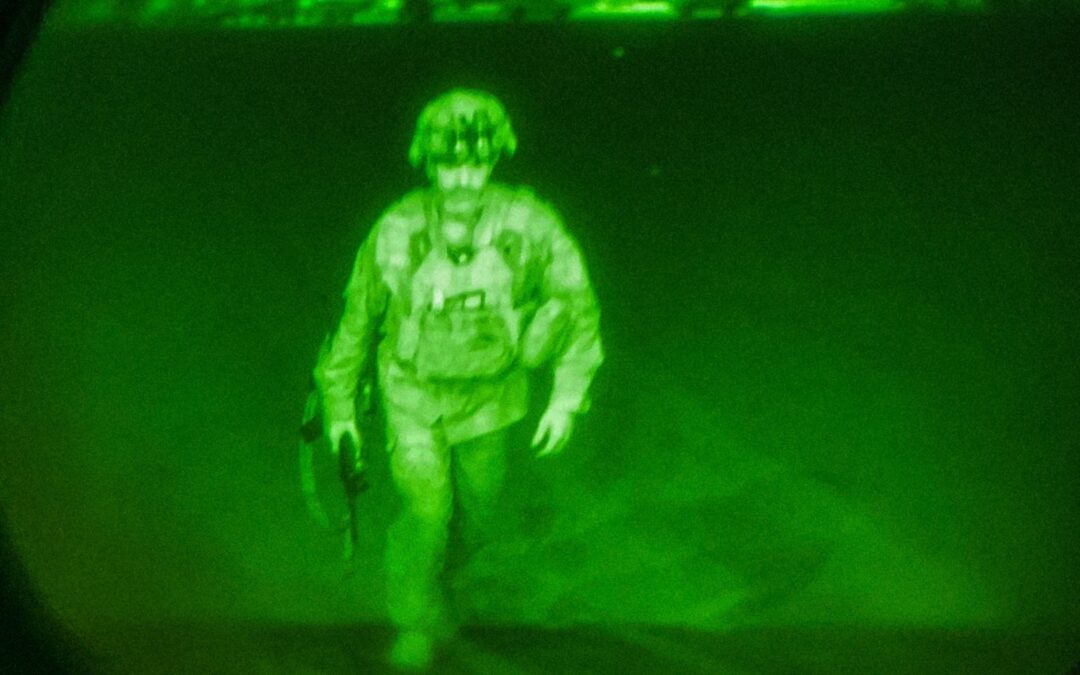 Since the last post, Afghanistan Crisis Update August 29-30, the US military departed Kabul, and Hamid Karzai International Airport (HKIA) closed. President Biden and his staff are treating this as “Mission Accomplished” and brushing off the countless stranded Americans, with Pentagon Press Secretary Jack Kirby saying, “Americans get stranded in foreign countries all the time.” Meanwhile, the Taliban, ISIS-K, and Islamic terrorist groups around the world are celebrating. 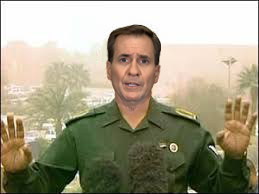 So how many Americans were abandoned in Afghanistan?

On August 17, White House Press Secretary Jen Psaki said there were 11,000 Americans in Afghanistan. That was only the number that the government admitted to being there.

The White House also said on August 30 that 5,400 Americans had been evacuated, and that only 300 remained “who want to get out.” No telling if that 500 of the night before got down to 300 by 200 evacuating, though it is not likely since there were no more evacuation flights.

By the end of the day on August 30, Pentagon Press Secretary Kirby had brought that 300 number down to “probably less than 100.” This in spite of the fact that no Americans were evacuated on August 30, as the military was wrapping up its operations. Today, Kirby said the number was in the “low hundreds” with “several hundred Americans” who “did not want to leave.”

So let’s do a little math. We’ll even give Kirby the 200 Americans who disappeared between August 29 and August 30. 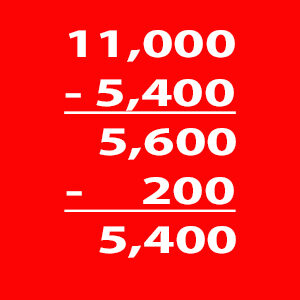 It would appear from the White House’s own numbers since August 17, 2021, that there are 5,400 Americans unaccounted for in Afghanistan. They seem to have ceased to exist as far as President Biden and his top administration are concerned. Conveniently for the White House, mainstream left-leaning journalists do not need math classes to get their degrees, and they are broadly going along with the White House’s somewhat-settled line of “100 – 200” US citizens stranded in Afghanistan under Taliban rule.

So who are these “Americans who want to stay” that the White House keeps talking about?

This unconscionable abandonment of potentially thousands of American citizens to one of the most savage, misogynistic groups on the planet, a.k.a. the Taliban, was not inevitable and was definitely not necessary to our US military withdrawal from Afghanistan. 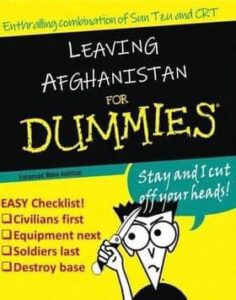 President Biden and his staff are promoting the notion that Biden was “bound by the Trump plan” to leave Afghanistan. To be clear, President Biden is THE Commander in Chief of the United States of America, and he is not bound by anything Trump did, as he has proven time and time again in every other facet of his duties.

The White House also initially attempted the stand-by almost every president has used when they royally screw the pooch, which is to blame the Intelligence Community. In a rare rebellion, the Intelligence Community — both military and civilian — joined ranks and disputed this, stating that they had presented numerous assessments indicating that if the US pulled out completely, the Taliban would overrun the country. Those military and intelligence personnel presented Biden with multiple plans for evacuating American citizens and Afghan allies and assets months ago, long before Biden had the military pull out of Bagram Air Base.

In the end, it was President Biden’s decision as Commander in Chief to ignore the intelligence assessments and withdrawal plans that would have secured our US citizens and Afghan allies, and he pulled out the military first, leaving only a few hundred troops to protect the tens of thousands of American citizens and Afghan interpreters, allies, and assets in Afghanistan.

What’s more, the impacts of Biden’s decision do not exist in an American vacuum.

By pulling out the US military, closing Bagram Air Base, and setting the August 31 deadline before securing citizens and allies or coordinating with our NATO and other allies, allied countries were also put in a bind when the Taliban blitz overran them.  This means that it was not only Americans and Afghan allies who were left behind, but also citizens of other NATO countries. Those countries begged Biden to extend the August 31 deadline so that they could evacuate their people and their Afghan allies.

President Biden sent the Director of the CIA, William Burns, to a tea party with the Taliban. Right after that conversation, the Taliban announced it would not tolerate any extensions. The Taliban declared that President Biden had named the date, and that he must live with it. Needless to say, our allies were not pleased.

In sum, leaving Afghanistan was always going to be a flaming mess, particularly for Afghan women. The way the Biden administration chose to leave Afghanistan has broken faith with our US military, American citizens, Afghan citizens, NATO allies, and any other US allies or assets we have around the world. Why would any country or asset in their right mind depend on us now?

So what happens next?

The Biden administration plans to give “humanitarian assistance directly to the people of Afghanistan.” That means giving money to the Taliban, since the Taliban is now the closest thing approximating a government in Afghanistan. In other words, we spent the last twenty years propping up a corrupt and ineffectual government in Afghanistan. Now, we will be propping up the Taliban, and they will likely use it for fighting the remains of the government we propped up for the past twenty years, now called the Northern Alliance, which is staging a resistance in the Panjshir Valley.

IMHO, this all translates into . . . We’re paying ransom to the Taliban to get our American citizens back, but we’ll be calling it “humanitarian assistance” and “economic aid,” and we’ll pretend that Americans released will be released completely because of the good faith dealing of the Taliban and the outstanding negotiations of the same idiots who got us into this mess.

Since the Biden administration failed to secure our own, numerous civilian organizations have been working continuously during this crisis to try and rescue Americans and Afghan allies that were abandoned by the US government.

One of those organizations is Digital Dunkirk, which provided satellite imagery and assistance to Americans and Afghan allies to get them past the Taliban checkpoints in Kabul and to the right gates at the airport. Those volunteers are still hard at work to retrieve families in grievous danger.

See Digital Dunkirk for ways to help get our fellow Americans and allies home.

Where the Taliban Stands

During the Taliban blitzkrieg through Afghanistan, they swooped up all of the military equipment and armaments the United States left behind for the Afghan military. As a result, the Taliban is now one of the top ten best-equipped armies in the world. In other words, the Taliban came out of this smelling like a rose, stronger than ever before, and the United States just fertilized a hotbed of terrorism. The Taliban has already freed thousands of ISIS-K from prison, appointed Haqqanis to top positions, and openly welcomed Al-Qaeda leaders. 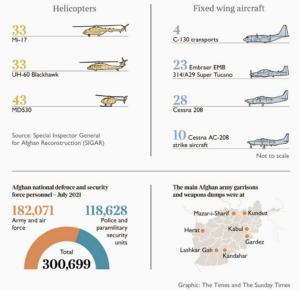 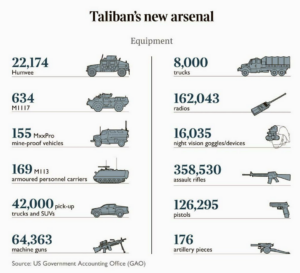 One of the first things the Taliban did with one of its new helicopters after the US took its last flight out of Kabul was hang a man and fly his body around the city. Currently, there are reports that the Taliban, with no justice system, no courts, no jail system, and virtually no more organization than feral cats, are going door-to-door, executing Afghans who worked with Americans. The Taliban is finding and identifying those US allies by using the list the Biden administration gave them, along with hand-held biometric facial recognition scanners that the United States left behind.

Now, twenty years after the attacks of 9/11, Islamic terrorist groups around the globe are celebrating what they see as the defeat of the United States of America at the hands of the primitive Taliban.

I would say they are wrong.

Though it is the fate of all successful nations to eventually grow soft and sedentary and be overrun by leaner, meaner, more driven societies, it was not the Taliban who defeated us. It was our own idealism and vanity in believing we could build a nation in our image by propping up corrupt figureheads and institutions, as if dreams and cash could instill Western civilization and values in sustainable measure to ward off the crushing stone-age forces poised to erase all progress upon our departure. It was our own inept, incompetent leaders who tolled the death knell of this twenty-year endeavor with the ineffable travesty of how we withdrew.

Afghanistan has long been known as the Graveyard of Empires, but the Taliban did not put the United States in its “grave.” We did that for ourselves.

But is it even over?

Many believe we will have troops, or at least intelligence operations, back in Afghanistan within months. Some believe they are already there. Time will tell.

In the meantime, it is left to us to bury and mourn our fallen and to honor those Americans, Afghans, and Allies who gave their blood, sweat, tears, and even lives to the noble cause of creating a better world than the one they were born into. They succeeded, even though our country did not, and the failures of our leaders in no way tarnish their sacrifice. With their heart, dedication, and heroic spirits, they did, indeed, make this world a better place. How grim would our reality be without them?

May there always be men and women of honor who vow to do good in this world,

not because of governments and rulers, but in spite of them.

It is for them, and them alone, that we must never forget. 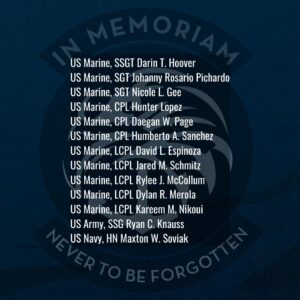 Here’s What The U.S. Military Left Behind At Kabul Airport, The War Zone, Joseph Trevithick, August 30

This is the real story of the Afghan biometric databases abandoned to the Taliban, MIT Technology Review, Eileen Guo and Hikmat Noori, August 30

Inside the Underground Railroad out of Afghanistan, Common Sense with Bari Weiss, Melissa Chen, August 30 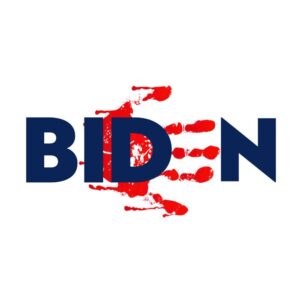